Yesterday I posted a fairly glum assessment of the fate of classic films on Bluray, but you can’t get too down-hearted about this stuff. So here’s a list of 30 films made (and for the most part released) in the 1950s — most of them large-format, nearly all in color — that need to be properly spiffed up and Bluray-ed. They certainly need looking after element-wise, particularly those released in the mid to late ’50s up until ’60 due to fading among those shot on “safety” stock. 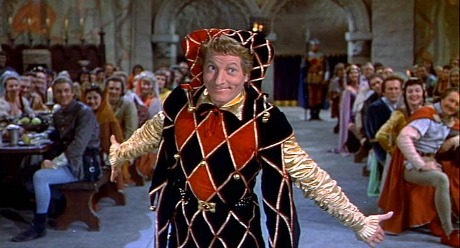 Danny Kaye in The Court Jester

It doesn’t matter if decent-looking DVDs of these films exist — they could all look much better and need to be re-done to satisfy the Movie Godz. If these films were properly restored and remastered for Bluray release we’d all be living fuller, happier lives.

One guy who helped me put this list together is Bruce Kimmel, former director (The First Nudie Musical), a motion-picture soundtrack record producer and a rabid film aficionado.

I need to mention the VistaVision problem before starting. Paramount shot and released over 100 VistaVision films in the ’50s, and so far we’ve only seen two of them properly transferred to Bluray — The Ten Commandments and White Christmas. It would be ecstasy if the original VistaVision version of Marlon Brando‘s One-Eyed Jacks (’60), a beautifully-shot western that’s has been mired in public-domain hell for several years, could be released on Bluray.

With three or four exceptions I’ve included large-format films that should play by today’s standards, and have avoided those that probably certainly wouldn’t work on Bluray due to being mediocre or awful by any measure.

1. William Wyler‘s The Big Country (’58…shot on SuperTechnirama, a horizontal 8-perf VistaVision-like format that renders a horizontally-squeezed image that came out un-squeezed at a 2.35-to-1 Scope ratio when projected anamorphically). The DVD of this Gregory Peck-starring western is so-so, nothing special, close to mediocre — a properly-rendered Bluray would be stunning.

2. Alfred Hitchcock‘s The Man Who Knew Too Much (’56…shot in VistaVivision). “The original negative has faded, and the two Universal Home Video DVDs so far have been blah-level. “It could and should be gorgeous…perfect,” says an east-coast source. 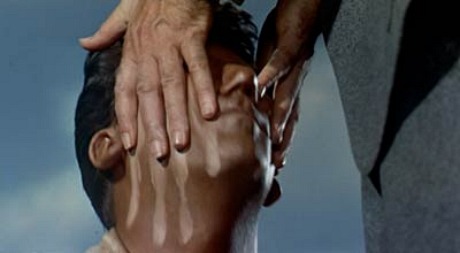 The Man Who Knew Too Much

3. Melvin Frank and Norman Panama‘s The Court Jester (56…shot in Vista Vision.). I’ve never even seen this film, mainly because I have an aversion to Danny Kaye. (Horrific images of Kaye coupling with Laurence Oliver flood my brain, etc.) A medieval spoof, gorgeously photographed. “The one Danny Kaye film that never dates,” says Kimmel.

4. Michael Todd‘s Around the World in 80 Days (’56…one of two films shot in 30-frame Todd-AO). A close-to-ghastly film that needs work, research, restoration. A film shot in 65mm 30 fps has to be saved, no matter how bad! Compared to what it should look like, given the exceptional elements, the DVD looks awful, bordering on out-of-focus. And yet the fact that it won the 1956 Best Picture Oscar (i.e., handed out in ’57) is perhaps the Academy of Motion Picture Arts and Sciences’ greatest embarassment.

7. John Huston‘s Moby Dick (’56). Shot and processed by Morris in washed-out color and rendered in release prints that were printed with a “gray” negative which gave the color a certain black-and-white tonality meant to resemble Currier & Ives etchings. This special color experiment has been simulated on the Moby Dick DVD, but it’s not the real thing, of course. I happened to see a single reel of a ’56 black-and-white release print at the Academy back in the ’80s — riveting.

8. William Wyler‘s Roman Holiday (’53). Lowry Digital’s John Lowry delivered a grain-free DVD in 2002. “It was a low resolution DVD made from the wrong elements,” a source remarks. “It was the same thing with Sunset Boulevard…they couldn’t find the original negatives or the original fine-grain on either one…it didn’t look filmish…it looked like a ‘kinny'” — i.e, a kinescope. 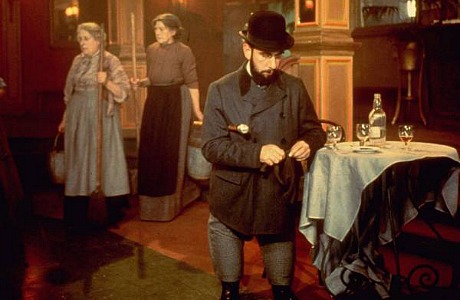 11. Vincent Minnelli‘s Gigi (’58). “They did everything they could [when they mastered the Bluray] but they were dealing with a faded original negative and bad color.”

12. John Ford‘s The Searchers (’56). “Needs to be re-done,” says Kimmel. “The Bluray is sharp but the color is wrong…they put too much yellow into it. Everything is wrong….Monument Valley sand is wrong….the sky is faintly greenish when it should blue….the clarity is fantastic but the adobe bricks in the opening credits are supposed to be gray but they’re blondish gold.”

13. George Stevens‘ Shane (’53). “It could be done like they did The African Queen and The Red Shoes, a beautiful Bluray done by Bob Gitt. They have a three-strip Technicolor negative…they just don’t have a clean HD master so how are they going to bring it out on Bluay?…it’s not a huge undertaking…but they just need to buckle down and go in that direction.”

14. Fred Zinneman‘s Oklahoma! (’55, shot in 65mm Todd AO 30 frame and also in 35mm 24-frame — two different versions). Kimmel, like me, saw Oklahoma! projected in 30-frame Todd-AO at the old DGA theatre back in the mid ’80s. “It was beautiful…you felt as if you could walk right into that picture,” he says. A laser disc that delivered the Todd AO version was sharp and handsome but for whatever reason the same version looks atrocious on the DVD. Kimmel says that Fox Home Video restoration maestro Schawn Belston believes that “the image compression screwed it up” and that the Todd AO version is salvagable.

15. Otto Preminger‘s Exodus (’60). A mediocre film shot in 70 mm that looked awesome when it was projected in first-run engagements some 51 years ago. “The DVD is the worst thing ever made and it’s a 4 x 3 transfer,” Kimmel remarks. “That’s one I’d love to see done right.” (Even if the film itself is quite difficult to sit through, he could have added.) 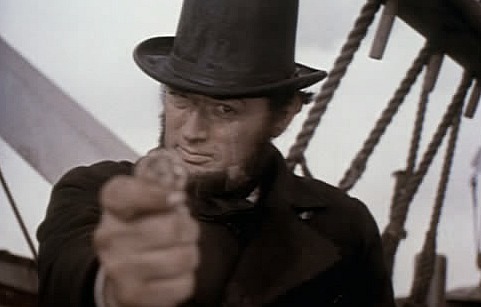 16. The three James Dean movies — Elia Kazan‘s East of Eden (’55, 35mm CinemaScope), Nicholas Ray‘s Rebel Without a Cause (’55, 35mm CinemaScope) and George Stevens‘ Giant (’56). “Giant is the worst of the three…the wrong process for the wrong film…they took the original Eastman negative and created a dye transfer print, which exacerbated all the problems….so they could say it was in Technicolor.”

17. Alfred Hitchcock‘s To Catch a Thief (’55, VistaVision). Paramount’s Centennial edition DVD, released in 2009, is the best-looking version of all, but just imagine how this exceptionally colorful thriller would look in Bluray.

18. Vincent Minnelli‘s Lust for Life (’56). Shot on Ansco, purportedly to get rid of the stock at hand.

19. Henry King‘s Carousel (’56), shot in CinemaScope 55mm, an eight-perforation process involving a slight horizontal blowup, the same process used on The King and I.