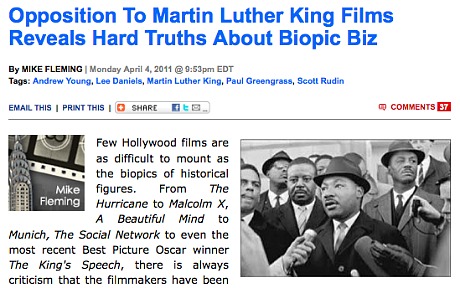 Fleming reported last Friday that Universal Pictures had scuttled Memphis after Young and “the King estate” applied pressure. Young confirmed to Fleming in the interview that he did indeed contact Universal and objected to a Memphis script draft that, among other things, depicted marital infidelity in Dr. King’s final days. Fleming also learned that Young was told by Universal that “it would not move forward with Memphis in response to his claims of factual inaccuracies.” A studio spokesperson told Fleming that Universal’s decision was “based on scheduling.”

“Young is admittedly protective of the reputation of his close friend,” Fleming writes, “and said he pines for someone to do for King what Richard Attenborough did for Gandhi.” Young tells Fleming that when he read the script for Memphis, “I thought it was fiction.” As for the depiction of infidelity, Young says: “There is testimony in congressional hearings that a lot of that information was manufactured by the FBI and wasn’t true. The FBI testified to that.”

Listen to what Young is saying here — “a lot” of the FBI information about King’s extra-marital trysts is possibly bogus, but not all of it.

“My only concern here is honoring the message of Martin Luther King’s life, and how you can change the world without killing anybody,” Young explains. “You’ve seen glimpses of that in the fall of the Berlin Wall, in Poland, South Africa, in a movement in Egypt that began with prayers, where even mercenaries and the most brutal soldiers have trouble shooting someone on their knees. These regimes crumbled before non-violent demonstrations, and that is a message the world needs.”

Fleming suggests that “when films canonize subjects, audiences can sense it, and that is why good biopics mix reverence with warts-and-all treatment.” Young replies: “It’s not wrong if the warts are there. But we had the most powerful and understanding wives in history, Coretta, my wife Jean, and Ralph Abernathy‘s wife Juanita. These women were more dedicated and enthusiastic in pushing us into these struggles than anybody, and the inference Coretta might have been upset about Martin being gone so much or them having marital troubles, it’s just not true.”

Listen again — Young isn’t addressing the accuracy of the allegations about King’s poon appetites, or asserting that King’s wife was or wasn’t aware of same. But to suggest that the late Coretta Scott King might not have been upset if (I say “if”) she was aware of her husband’s alleged extra-marital activities, or that she may have been “understanding” in this regard, is flat-out absurd.

Young tells Fleming “he offered input” on Memphis but hasn’t heard back. “I said I would pay my own way to LA to sit with the writers, tell what really went on, and give them names, but nobody took me up on it,'” he says. It would a respectful gesture for any MLK biopic filmmaker to consult with Young, but given the levels of Young’s denial about King and his commitment to hagiography in defiance of reported fact, what self-respecting creative would want to go there?