Support on Patreon Follow @wellshwood
7 Comments
Kid Has It

For me, Henry Hooper — the 19 year-old son of the late Dennis Hopper — was the big takeaway from last night’s screening of Gus Van Sant‘s Restless. Yes, the movie is somewhat precious and Harold and Maude-like, but I got an unmistakable sense that Hopper has more in his quiver than what the material has asked of him. Partly because Restless is a bit too gentle and alpha for its own good, but also because Hopper seems to be holding back for some reason. Which, to me, feels interesting. 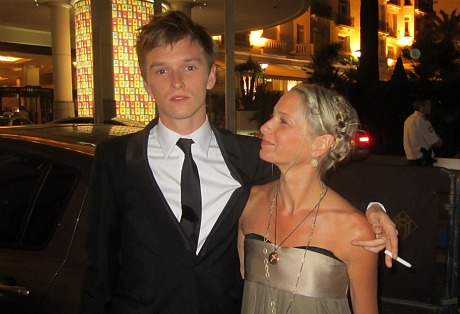 He projects interior currents that have been thought through, or at least don’t seem too acting-school instinctual or showoff nutso. He has a reasonably steady, patient, almost Montgomery Clift-like vibe, which I would describe as bothered and vulnerable but not childish, and connected to some kind of integrity or value system — there are lines he won’t cross. There’s a sense of intelligence and discernment in Hopper. He doesn’t seem to be handing the role of Enoch — a kid who’s survived a car crash that took his parents’ lives and thereby has a morbid curiosity about death and ghosts and whatnot — in a manner calculated to appeal to dim-bulb teenage girls. And he’s good looking in a Clift-like way (similar bone structure, narrow nose). I don’t want to overdo this but he has…well, a sharp but oblique quality that could grow into something.

I ran into Hopper on the street last night in front of the Martinez. He was with his agent, Ilene Feldman, and…I’ve forgotten her name but she’s blonde and pretty and smokes. A few minutes before I came over I noticed he was a bit upset about something, which I gathered because Feldman was gently patting his back.

I think I might have responded more positively to Restless had it been shot in Van Sant’s rough verite style — 1.33 to 1, unscored, extended-tracking-or still-shot mode of Last Days and Elephant. Restless is decently written and nicely acted, but it’s oddly scored here and there (I heard a piece of charmed/tender/sensitive music that was used in Badlands and True Romance — Carl Orff‘s “Musica Poetica,” I think it’s called) and on a certain level almost feels like a kid brother or first cousin of Gus’ Finding Forrester. No, it’s not that calculating, but it’s a little too movie-ish in a carefully composed, too-many-producers sense. It needed to be more raggedy-ass.

I haven’t time to write a ten-paragraph review (it’s 6:55 am and there’s an 8:30 am screening of Habemus Papum breathing down my neck) but I pretty much agree with Variety‘s Justin Chang.

“At once delicate and clumsy, tender and twee, Restless wraps the pain of grief and impending mortality in the balm of a teenage love story. Working in a more accessible, less poetic vein than that of Paranoid Park, director Gus Van Sant draws enough low-key sweetness and charm from his young actors to offset some of the more self-consciously cutesy aspects of this quietly death-obsessed scenario.”

Certain female critics and bloggers (including Stephanie Zacharek) have either dissed or gone “meh” on Bridesmaids, to which I can only respond “what?” (Here’s my 5.3 review.) But thank God for balance and general perception’s sake that N.Y. Times critic Manohla Dargis has come down positive. Because this movie strikes new ground with wit, courage and flair. And okay, with a sprinkling of grossitude.

“It would be easy to oversell Bridesmaids,” she writes, “though probably easier if also foolish to do the reverse. It isn’t a radical movie (even if Melissa McCarthy‘s character comes close); it’s formally unadventurous; and there isn’t much to look at beyond all these female faces. Yet these are great faces, and the movie is smart about a lot of things, including the vital importance of female friendships. And it’s nice to see so many actresses taking up space while making fun of something besides other women.

“Perhaps the biggest, most pleasurable surprise is that Bridesmaids doesn’t treat the status of [Kristin Wiig‘s] Annie as a dire character flaw worthy of triage: she’s simply going through a rough patch and has to figure things out, as in real life.”

As we speak Bridesmaids has a 91% Rotten Tomatoes approval rating and a 74% approval on Metacritic. Wait…74%?

EW‘s Owen Gleiberman calls Wiig’s Annie “an Everywoman you can believe in, showcased in the kind of deft comedy of feminine passion — where deep despair meets Wilson Phillips — that a great many people have been waiting for. Now that Wiig and company have built it, will they come?”

21 Comments
What Seems To Be 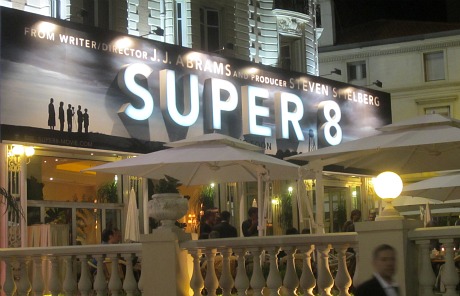 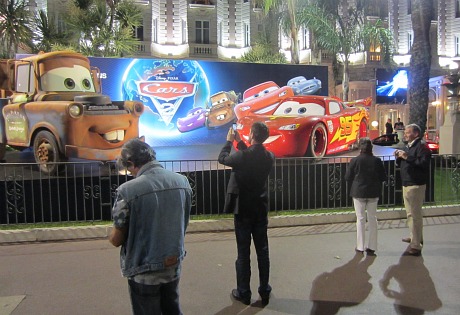 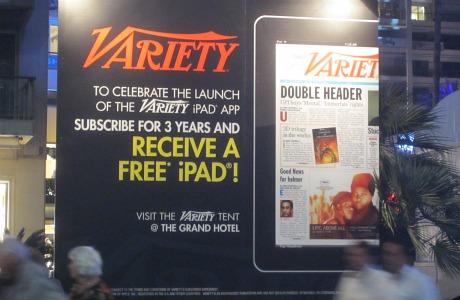 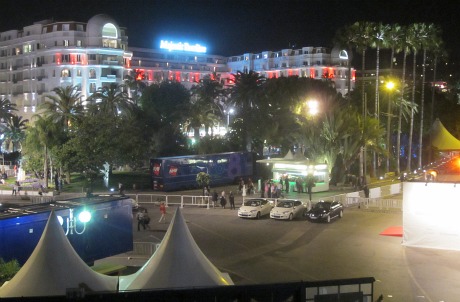 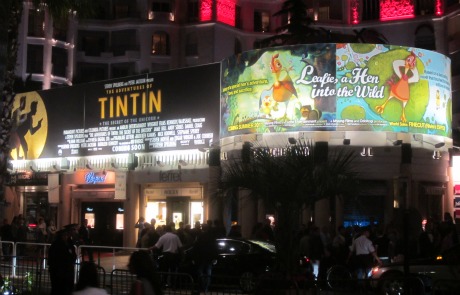 A man who co-directs effing Tintin can’t hope to really do a Lincoln movie right. I’m sorry but I really believe that. 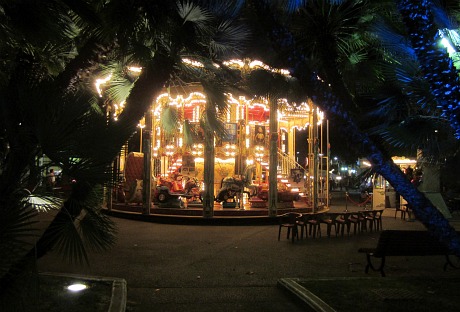 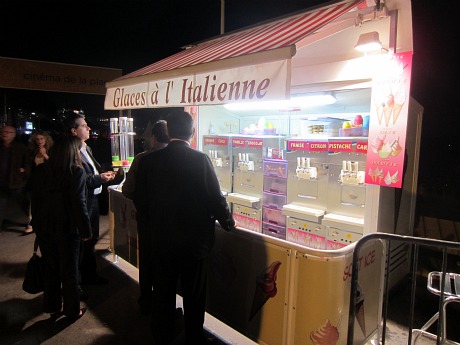 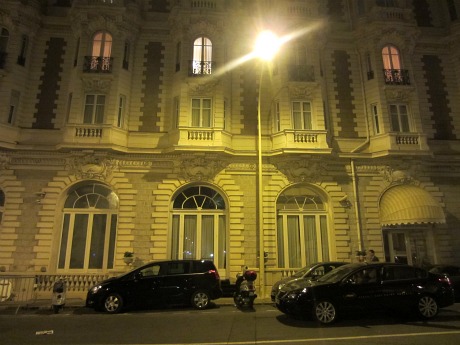 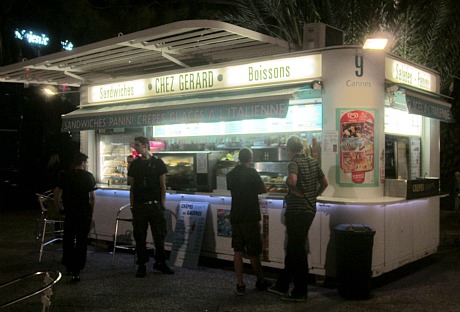 Gus Van Sant‘s Restless screens at 7:45 pm (i.e., 45 minutes from now) and then, just for fun, I’ll be catching a 10 pm screening of Jerry Schatzberg‘s Puzzle of a Downfall Child. Well, not too much “fun”, I suppose. I have murky memories of a rep house viewing sometime during the ’80s and particularly Faye Dunaway‘s character suffering much angst and disorientation; I also remember Schatzberg’s schizoid cutting style.

Since I post these exact same photos each and every year, I thought I’d get them out of the way during my break. An hour on the bed and then two films back-to-back — Polisse and then Gus Van Sant‘s Restless. I just talked to a journalist who’d seen the GVS. Me: “So whadja think?” Journalist: “I don’t want to get in the way of your viewing. You should just see it clean.” Translation: It’s a problem. 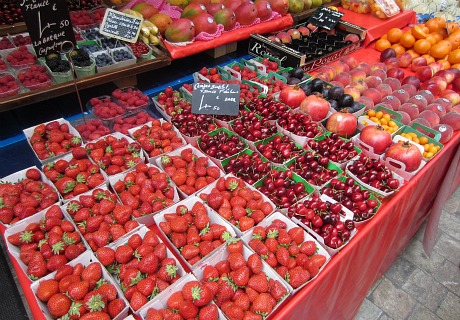 Judd Apatow to Karina Longworth, posted yesterday: “I love your new head shot. You are officially cast in Bridesmaids 2. We needed a sour girl.” 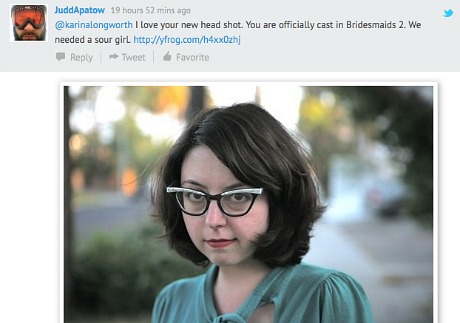 Lynne Ramsay‘s We Need To Talk About Kevin is a beautifully painted, radiantly colored, anti-verbal horror film about a sociopathic monster — Ezra Miller‘s Kevin — and how his hatefulness and alien-ness has…well, not much but something to do with his mother (Tilda Swinton ) and father (John C. Reilly), but mainly his mom, who’s bothered by certain proverbial undercurrents but nothing too off-the-charts. 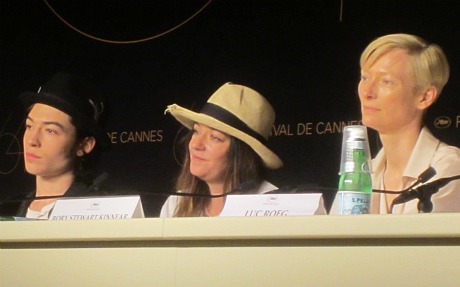 (l. to r.) Ezra Miller, Lynne Ramsay, Tilda Swinton during this morning’s press conference for We Need To Talk About Kevin

This is never explained or filled in, of course. As far as Ramsay’s film is concerned Kevin is just a steely-brained, black-eyed Belezebub who’s been brought to life in order to pour acid into people’s lives. His ultimate acts of destruction happen at the very end, but they’re pretty much anti-climactic given the certainty in the audience’s mind that the only humane and compassionate response to this kid early on would have been to put him in a burlap bag, fill it with rocks and toss it off a pier.

Swinton’s Eva, whom we’re told is a “legendary adventurer” who writes best-selling books, is perplexed, appalled, repelled, guilt-ridden and generally at a loss about what to do with this rancid little fuck or how to get through to him. Reilly’s Franklin is an oblivious dad whose powers of perception are staggering for their absence. For all the recognition and conversation these two share about the obviously malignant nature of their son the movie should have been called Let’s Not Talk About Kevin.

Ramsay’s film, based on Lionel Shriver’s 2003 same-titled novel, is about the freedom she had as the director to revel in visual flourish, and particularly the color red but more than the color — I mean the mad sensual bath that is the oozy, slurpee mashed-tomato red. Ramsay clearly had a ball shooting and cutting this thing, but her lack of interest in making the characters seem even half-recognizable as (I don’t mean to introduce a sore subject) human beings with the ability to think, observe and comprehend is nothing short of breathtaking.

A journalist friend (I’m not using her name in order to show compassion and to protect her reputation) told me she “loved” We Need To Talk About Kevin. She said this right after I’d emerged from the theatre, and all I could say was “you loved it…?” I then muttered something along the lines of “I give up” and walked away. I was emotionally overcome, you see. I was astounded by the ugliness that’s embedded in the soul of this film and all that poison was just leaking out of me and starting to be dissipated as we spoke.

By virtue of Miller’s presence and acting style alone (as well as that of the equally repellent kids who play Kevin at earlier stages of life), We Need To Talk About Kevin is, emotionally speaking, rat poison. Swinton and Reilly’s performances are very good but hampered, as noted, by the fact that they don’t get what’s going on with their son, and their lack of courage in not following the suggestion I made in paragraph #2. 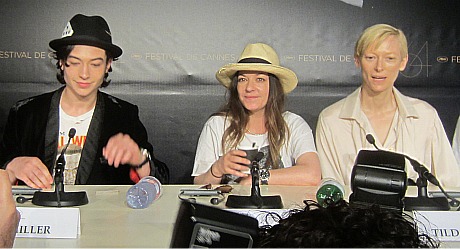 Update: In his positive review, Indiewire’s Eric Kohn states that “Kevin’s issues are clearly related to his mother’s disdain for him, which Ramsay tracks all the way back to the crib. As she forces a grin while the baby can’t stop crying, Eva looks like she has a little bit of a maniac side to her as well.”

No…no. What’s clear is that Swinton’s Eva isn’t delighted with motherhood, but she gives it what she has to give. News flash #1: The world is full of parents who (like my dad) have realized early on they weren’t exactly cut out for it but have given it the old college try, and guess what? Their kids might be hurt by this but they don’t turn into Damien: Omen V.

The film does make it especially clear that Swinton isn’t happy with the experience of giving birth. News flash #2: No mother ever has been. It also shows Eva doing badly with a constantly wailing baby due to colic syndrome. News flash #3: Every parent in the history of the universe with a colic-y baby has known a form of madness. My son Dylan’s colic-y condition amounted to psychological torture that I became very resentful of as the weeks wore on, and yet somehow Dylan never sensed my inner resentment about this and used it to further his transition into a permanently dark and demonic psychology on his road to becoming a high-school mass murderer. I don’t know why he didn’t grow up to kill me and his brother and a portion of his high school class a la Harris/Klebold, but he didn’t. He did, however, become a hugely talented artist.