The social engineers who arranged the Big Fix after-party at the Schweppes beach bar opposite the Carlton apparently figured it would take guests 45 minutes to walk from the Salle de Soixentieme screening to the after-party. Except it took EW‘s Dave Karger and myself about 12 or 13 minutes, taking our time; we arrived there at 10:20 pm. Despite this the Big Fix people told their goons not to let anyone in until 11 pm. Charming! 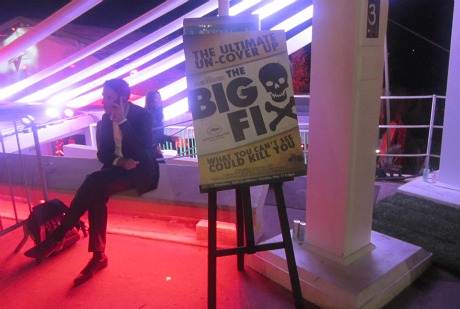 Team Big Fix deserves a firm slap across the chops. “Please come to our party…and we’re sure you won’t mind having to stand around on a sidewalk for the better part of an hour before we let you in.” Michelle Rodriguez (“How ya livin’?”) and her small posse talked their way in but that’s because she was (and probably still is) Michelle Rodriguez. Deadline‘s Pete Hammond was toughing it out but I said “eff this” and went home. Karger bailed way before I did. 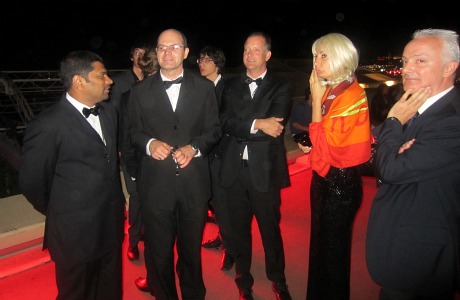 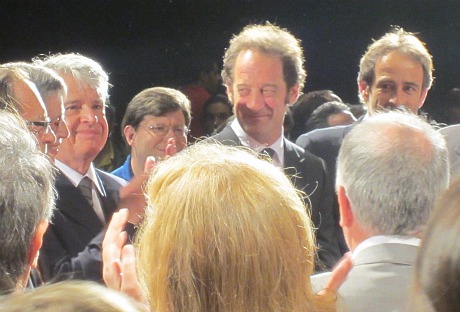 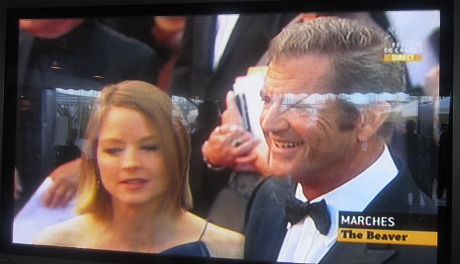 If you thought the prospects for a relatively stable, healthy society were doomed after seeing An Inconvenient Truth and then extra-double-doomed after seeing Collapse, Josh and Rebecca Tickell‘s The Big Fix is the whipped cream and the cherry on top. It’ll make you feel triple-screwed, deflated, poisoned, abused, tattooed and up shit creek. 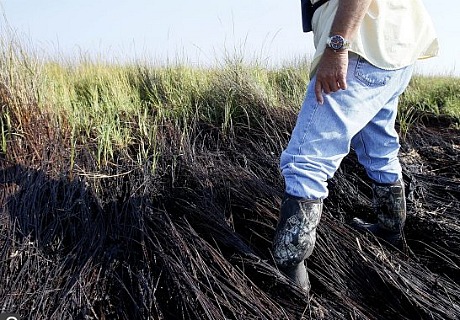 And it’s all perfectly true. I’ve heard and read every last soothsaying, doom-predicting word it delivers in articles, books and yaddah-yaddah, and it’s all on the money.

The Big Fix begins as an earnest but mild-mannered doc about the aftermath of the 2010 Deepwater Horizon oil spill and how lying British Petroleum’s cavalier attitude about safety was the father of it. So it starts somewhat mildly with a tour of some of the Gulf of Mexico towns hardest hit by the spill with the two filmmakers + the gently smiling executive producer Peter Fonda in tow for celebrity value. I was kind of wondering if The Big Fix was going to pick up steam or if this was it.

And then wham…it hits a vein when it begins showing how BP has been spraying the gulf with the disbursement chemical called Corexit, which hides the oil by turning it into little speckballs instead of big fat gobs and has been creating major health risks for for coastal dwellers and marine life alike.

And then Rebecca herself starts exhibiting disturbing skin-rash symptoms, and we’re told near the end that her longterm health prospects may be uncertain.

Yes, The Big Fix needs a bit of trimming. Lose the simple-Simon, me-and-my-wife-making-a-movie opening with Fonda and kick it into gear a bit faster. But the way this thing trampolines from an evil-BP, hand-wringing lament piece into a tough portrait of inevitable corporate Armageddon…wow! It just goes to town and links it all together and hits you with fact after fact after fact. “Are you getting this?,” it’s basically saying, “or are you going back to sleep now?”

This is serious. The extremely selfish mega-rich are running out the string and the bought-and-paid-for politicians (like Louisiana’s reprehensible Mary Landreau) aren’t going to do a damn thing to turn any of this around. We’re seriously fucked. Or, as Don Cheadle said to Miguel Ferrer in Traffic, “No…you’re FUCKED!”

And it bitchslaps Barack Obama big-time for being an obliging tool of oil-rich corporate America…a sell-out. It delivers the toughest anti-Obama diatribes seen or heard outside the realm of Republican-funded hitjobs, and the Tickells are green lefties, mind. Considering the news and general evidence presented it seems hard for much of a pro-Obama case to be made. He frowned and empathized and basically cruised through the spill. BP, the film reminds, has only paid off on one citizen lawsuit.

The planet is being raped and poisoned and choked and is inexorably winding down. No mild-mannered remedies, the film says. Take to the streets and bring this shit to an end or wait for more crises, but either way it’s not going to be pretty.

There’s too much debt, too much greed, not enough oil and it’s all going to start falling apart — in fits and starts, bit by bit and then more and more, and then eventually…well, look out. A vast and terrible turnover that will devastate and destruct is just around the corner. Ten years, twenty years…forget it. Unless everyone wakes up and starts really screaming.

A journalist friend with some inside knowledge of the character of this Cannes jury says the following: (a) chairman Robert De Niro is not the most knowledgable guy in the room; (b) DeNiro is also a comme ci comme ca type who’s not likely to try to lobby for personal choices or views, (c) Chopsocky director Johnnie To has a somewhat myopic, know-nothing view of other films or filmmakers — he pretty much lives in his own realm; (d) the hippest and most knowledgable jury members are Linn Ullmann (journalist daughter of Liv Ullmann) and director Olivier Assayas (Carlos). 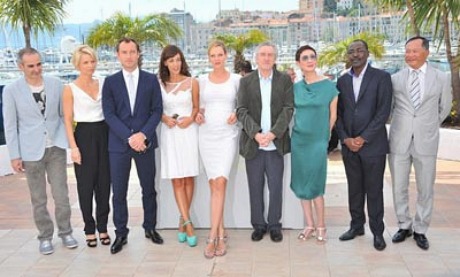 In a Tree of Life review that he had the luxury of building and refining over a few days, having seen it last week in Los Angeles, Hollywood Reporter critic Todd McCarthy says that Terrence Malick‘s film “is hardly a movie for the masses and will polarize even buffs, some of whom might fail to grasp the connection between the depiction of the beginnings of life on Earth and the travails of a 1950s Texas family.

“But there are great, heady things here, both obvious and evanescent, more than enough to qualify this as an exceptional and major film. Critical passions, pro and con, along with Brad Pitt in one of his finest performances will stir specialized audiences to attention, but Fox Searchlight will have its work cut out for it in luring a wider public.”

So far the Village Voice‘s Jim Hoberman is the biggest name-level critic to pan it…I think. Here, again, is my 60-40…okay, 70-30 review. And here;s an admiring take from N.Y. Times critic Manohla Dargis.

I heard from a trusted source yesterday that Sean Penn‘s part in The Tree of Life, which is barely there with maybe ten lines of dialogue, if that, was fairly substantial in earlier cuts, but like Adrien Brody‘s character in The Thin Red Line, it was gradually cut down to nothing. Penn is here but didn’t attend the Tree of Life press conference because…ask him.

“You betrayed me over a decade ago with the maid? Okay, that’s it…marriage over!” I get it, of course, but at the same time…c’mon. It’s been an industry legend for a long time that Arnold Schwarzenegger is a hound. The odd part is that he reportedly told Maria Shriver only after leaving the governor’s office, or more than a decade after the housekeeper affair happened. I presume he didn’t offer this information — what sane person would? — but was busted.

Every year I try to do my best in covering the Cannes Film Festival. I think I do an above-average job. But what I really excel at is missing the debut showing of at least one stand-out film. Each and every year about halfway through the festival I fail to make an 8:30 am screening that turns out to be exceptional. This year, apparently, that film is Aki Kaurism√§ki‘s Le Havre. 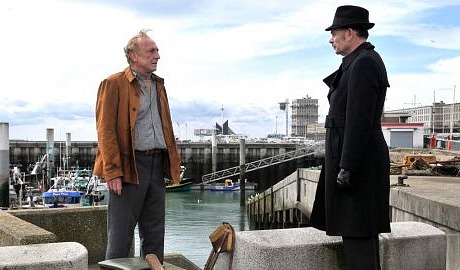 “The Artist is no longer the best crowd-pleaser in competition at Cannes,” Indiewire‘s Eric Kohn tweeted a while ago. “That honor goes to Kaurismaki’s sweet deadpan comedy Le Havre.” And from Sasha Stone: “Really loved Le Havre. Wonderful film. Funny, sweet, ironic.”

A 5.12 Badass Digest piece by Moises Chiullan complained that the forthcoming, all-bells-and-whistles Citizen Kane Bluray package includes only a DVD of Orson Welles‘ The Magnificent Ambersons (’42) and not a Bluray. A high-def Ambersons would be welcome, of course, but I’ve never gotten the fervor so I’m not all that put out. 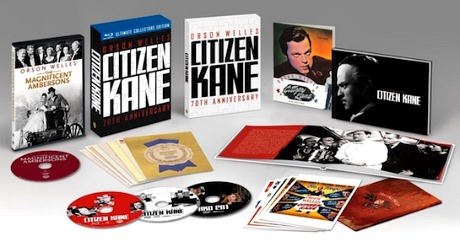 I’ve twice seen the general-release, famously-truncated version of The Magnificent Ambersons — Welles original 135-minute cut is gone forever — and the second time was a bit difficult to get through…sorry. Everyone loves the production design and the first 20 to 30 minutes (an affectionate evocation of America’s gentile, horse-and-buggy days before the automobile) but Tim Holt‘s arrogant scion is such a drag to hang with.

All my filmgoing life I’ve had a special regard for Sophia Loren‘s bedroom striptease scene in Vittorio DeSica‘s Yesterday, Today and Tomorrow (’63). Or stills from this, rather. And then two or three years ago I saw the film for the first time. And I learned that sometimes frame captures should be valued for their own merits. YT&T, which costars Marcello Mastroianni, comes out soon on Bluray. 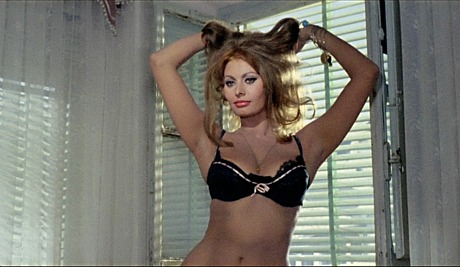 By declaring an instinctual resistance to including made-for-cable movies into the Oscar realm, a genuinely good and brave idea passed along by director-screenwriter Paul Schrader, I regret to say that Roger Ebert has painted himself into a nostalgic 20th Century corner.

“Why not?,” he says in a 5.15 Newsweek/Daily Beast article. “It’s tempting, Paul. I could relax before my big eight-foot home-theater screen, and the work would come to me. The problem is, that goes against my grain. A movie is shown in a movie theater, and I like to sit there and see it. That’s how it’s supposed to be. I’m not ready to bowl alone.”

No…no. That’s over. That ship has sailed. The collusion of corporate calculation and mass Eloi taste buds have all but ruined the upscale movie business, and the only way to get past this (or get around it) is to finally and completely jettison the idea that the best high-end, intelligent or semi-intelligent films open only in theatres first. The whole theatres-first distribution concept is out the window when it comes to movies with a brain…has been for years. The best are the best, no matter how they arrive.

Schrader, says Ebert, claims that “grown-up films and creative projects are ‘over’ in the new Hollywood, and that many of his friends are turning to long-form television.” Here’s how Schrader put it :

“The quality of theatrically released films has been dropping so precipitously in recent years that the Academy Awards are no longer a fair gauge of audiovisual entertainment. Several decades ago audiences could expect a film such as The Social Network every week; now we are lucky to have one or two a year.

“Add to this the fact serious dramas have more or less migrated to television, and it’s clear that the Oscars have become progressively less relevant.

“A veteran film critic — by this I mean you, Roger — should take it on himself by unilaterally abandoning the distinction between theatrical and nontheatrical films in year-end best-of lists. All long-form audiovisual entertainment, released on any distribution platform, would be eligible for consideration. The Academy, of course, would regard this as a nightmare. It would downgrade the ‘specialness’ of theatrical films. But this is all happening anyway so why not get ahead of the curve?”

Movieline‘s Stu Van Airsdale has written very passionately and persuasively about this also.