Paul Feig‘s Bridesmaids (Universal, 5.13) may not be as screamingly, howlingly funny or fast-paced as some might prefer (especially if you think like Variety‘s Joe Leydon) and is perhaps a bit sadder and darker than you might expect, but it’s way, way deeper, smarter and more realistically grounded and character-driven than any female ensemble comedy since…ever.

And it’s the best straight-up female-relationship movie since I-don’t-know-when. And it’s wiggy and a bit strange and scatalogical. And riddled with knowing tough dialogue. And about as naked (in the Mike Leigh sense of the term) as this kind of confection can get.

Yes — the term “wiggy” was a pun. Because Bridesmaids also reps a major career breakout for star and co-writer Kristen Wiig, who gives one of the most honest and believably grounded female comic performances in a long, long while. (Peter Sciretta‘s SXSW prediction that she’ll almost certainly be nominated by the HFPA for Best Female Comedy/Musical Performance was dead-on.)

Pic is a feather in the hats of director Paul Feig and producer Judd Apatow and Wiig’s co-writer Annie Mumolo. And it’s easily one of the year’s best so far.

In short, Bridesmaids is nowhere close to being dumb or primitive enough to become a big hit. The young girly-girls who like going to Kate Hudson comedies are going to be saying “what…?” But women with careers and smarts and a little life experience under their belts are probably going to get it big-time, just like the late twentysomething ladies who were sitting next to me at the Arclight last night and laughing all through it.

Bridesmaids is not so much about feuding bridesmaids as a portrait of a meltdown by Wiig’s Annie character. As Maya Rudolph‘s best friend she’s asked early on to be her maid of honor. Except the wedding sends the unstable Annie into a self-destructive downswirl. Annie has always been her biggest problem, we’re gradually informed, but to see her actually become this in action is something else.

An attractive but not-quite-knockout type in her mid to late 30s, Annie is a cupcake-and-dessert chef whose retail business has crashed. And who has a couple of idiotic -and-obnoxious overweight British roommates (which kinda makes no sense). And is in a one-sided fuckbuddy relationship with a glib asshole (Jon Hamm). And who starts to feel really bad about Rudolph’s wedding, and then feels worse when Rose Byrne‘s girly-girl character does everything she can to elbow Annie out of her slot as Rudolph’s best friend, but who also meets a nice-guy cop (Chris Dowd) who gets her and whom she likes but of course pushes away, etc. 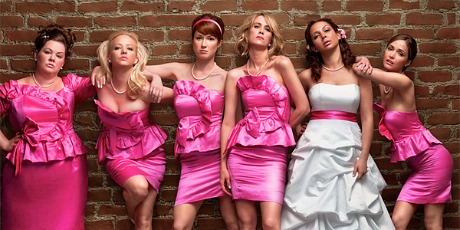 About 1/3 of it is really funny, 1/2 is half-funny and the other 17% is fairly dark material (but in a very well written and well-acted way).

Nobody overacts in Bridesmaids. It’s “funny” but it stays on a realistic level. Most of the characters come through in a three-dimensional way…even Byrne’s villainess. I’m told that the adult comic tone is all about the “keep it smart and real” comic sensibility of the Groundlings, where a lot of the principals hail from. I don’t know what to compare this film to but it never really wallows or panders to cheap or common slapstick or sentimentality…it doesn’t lower itself.

Even I laughed out loud a few times, and that’s saying something because I’m primarily a LQTM type of guy.

When Hollywood Reporter critic Todd McCarthy and I and Pete Hammond and a couple of others were talking about it after last night’s screening, one of the things we said was ‘what is Joe Leydon’s blockage on this thing?’ Why did his Variety review pretty much flat-out pan it? From a certain perspective flat-out panning a film this tonally and uniformly together, and one this intelligently focused and which understands itself and has integrity and so on….you can’t pan a film like this!

Okay, it feels a bit too long. It runs about two hours and it probably should have run 100 or 105 minutes. Okay, 110 minutes. But Apatow’s movies always go long so whaddaya gonna do?

Here’s how I put it in an e-mail to Apatow last night:

“I’m sorry, dude, but except for the slightly sloppy and not-quite-perfect ragtag ending with [a well-known ’80s musical group], Bridesmaids is — don’t get mad — better than Funny People. It really works, is really good almost all the way and has, as you obviously know, EXCELLENT comedic writing. But it also has the courage to not be funny and even go moderately dark at times.

“Wiig is going to be nominated for something — this is a real performance and not an assemblage of SNL bits and comic attitudes. I especially loved her raging-meltdown scene at the Paris-themed shower. And Maya Rudolph and Melissa McCarthy (giving one of the best supporting performances by a calorically-challenged comedienne I’ve ever seen) and Chris O’Dowd…all great. And the bridal shop crap-in-the-street scene — a classic.

“Given that you have such a smart, stand-out, very grown-up female comedy, Universal is, I’m fairly sure, sick with worry that Bridesmaids is one of those ‘so good and mature it’s not going to make very much money’ comedies. It’s being sold as a much lower-level thing than it actually is. I know that when I like a comedy it’s always a bad sign. ‘Oh, no….Jeffrey Wells likes it!,’ a Universal exec might very well say in the next marketing meeting. ‘The kiss of death for a hopefully broad-appeal chick flick! Now we’re in real trouble!'”