I hate frivolity. I despise escapist “fun.” I loathe corporate-supplied nothingness. And I abhor CG movies in which anything can and does happen and no rules apply and people fly through the air like winged squirrels and everything is meaningless eye syrup. I agree somewhat that Rob Marshall‘s Pirates of the Caribbean: On Stranger Tides, which I caught this morning, is a little more like the first one and therefore more tolerable, etc. But I mostly hated the first one, you see. 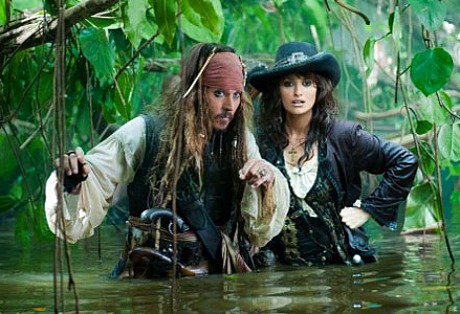 So how did I get through the damn thing (i.e., all two hours and 17 minutes ‘ worth)? Through selective concentration on aspects I found appealing.

(1) The incessantly rich, razzle-dazzle composition of the photography. Everything you see in each and every shot has been lit within an inch of its life, finessed to a fare-thee-well, sprayed and misted and gone over with a fine tooth comb. No visual element has been left to chance or under-utilized. The problem, of course, is that it’s all in the service of cancerous swill.

(2) I realized early on that in the realm of fountain-of-youth action-adventures, this inch-deep hodgepodge makes Steven Spielberg‘s Indiana Jones and the Last Crusade look like a masterwork, an art film, a movie with a near-soul, an Alexander Korda 1940s classic.

(4) Some of the 3D shots are appealing, but mostly the 3D element is just okay. None of it staggers. Honestly? I could’ve rolled with a flat version.

(5) The only 100% sincere performance is given by Sam Claflin, playing a missionary (Sam Claflin). The mermaid he falls in love with (played by Astrid Berges-Frisbey) is pseudo-topless in much of the film, which is to say impressionistically. She’s carefully covered in old-style ’50s fashion, like Maureen O’Hara‘s big scene in Lady Godiva. Why would a Disney film include a topless mermaid in the first place? What’s the point?

(6) I spent a lot of time thinking about all the hundreds of millions that have been pointlessly spent making these films and even more pointlessly earned in theatres worldwide, and about what Johnny Depp and Jerry Bruckheimer made (and will earn back-end) on this one, and what they paid Penelope Cruz and how much Geoffrey Rush pulls down, etc. And what kind of food was served on the set and where everyone stayed when they shot in Hawaii, England and Puerto Rico. What kind of per diems did they receive?

(7) Ian McShane‘s performance as Edward “Blackbeard” teach is an eye-level, steady-as-she-goes, only slightly japey turn. I relaxed somewhat when he was on-screen. McShane seems to actually sink into the role to some degree; he’s goofing along with everyone else, of course, but in a somewhat restrained, steely-McShane sort of way.

(8) The CG evocations of old London are nicely done. I just wish the camera could’ve held still for four or five seconds so I could’ve absorbed a bit more detail.

(9) The absense of Orlando Bloom and Keira Knightley isn’t a problem. At all.