What's So Bad About Hand-Puppeting?

I reviewed Jodie Foster‘s The Beaver on 3.16 from South by Southwest, and am re-posting a portion of the piece to synch with Friday’s opening. 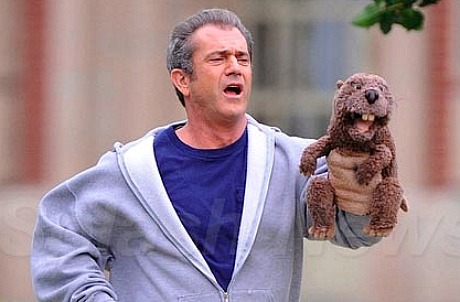 “The Beaver is more of ‘heart’ thing about healing and family and forgiving,” I said. “And it uses lots and lots of closeups of Mel Gibson‘s lined and weathered face and his graying, thinning hair. What he does about 70% of the time is look forlorn and gloomy and guilty about his shortcomings. Foster is making a film, after all, about putting demons to bed and climbing out of our personal foxholes. So at the end of the day The Beaver, which is essentially a chick flick, guides Mel’s Walter character, who goes through major hell in this film, back to health and vibrancy.

“So it’s a nice soulful movie, a film that cares and gives hugs and feels sad for poor Mel during his aberration period when he goes absolutely everywhere with that brown hand puppet and acts peppy and talks like an Australian Ray Winstone. But the Beaver scenes, unhealthy as they may be for Mel’s Walter character, give the film its sass and vigor, and when the Beaver goes away near the end, the movie loses its fuel and its raison d’etre.

“As everyone knows, The Beaver is about Gibson’s Walter being depressed and on the verge of suicide, but then snapping back to life when he surrenders his identity and personality to the Beaver puppet. The Beaver takes over and Walter is alive again — his wife (Foster) falls in love with him again, his toy business becomes revitalized, he and The Beaver go on a lot of talk shows and appear on magazine covers, his younger son loves his aliveness….although his older son (Anton Yelchin) hates the whole Beaver routine and thinks his dad is an asshole.

“I took Gibson’s decision to hide behind the hand puppet as a metaphor for the way all of us hide the weaker, softer, more vulnerable aspects of our personality from society and the business world especially. Gibson isn’t ‘himself’ during his Beaver phase, but his Beaver personality is alert and creative and crackling, and he’s walking around all day with a spring in his step and paying his employees and steering a winning ship, etc. What’s so bad about that?”

Six weeks later I feel the same way. Gibson’s Beaver personality in the film isn’t relaxed or soulful or wise or warm, but he’s definitely a live-wire and in a hell of a lot better shape spiritually than the tens of millions out there who walk around like zombies at the mall and who hate or sleepwalk through their jobs and zone out in front of the tube on weeknights and weekends.

So the “problem” that Gibson’s Walter character is dealing with in The Beaver isn’t that bad of a problem. It sure as hell isn’t so bad that he has to resort to a table saw to fix things.