I was milling around a Hollywood hardware store sometime in the early ’80s, looking for a screwdriver or something, when I heard raised voices. Two or three Joe Sixpack-type meatheads were having fun at the expense of Peter Falk, who was poking around like me, just wandering down the aisles. “Aaaaay…Detective Columbo!,” one of them was saying with the rest joining in. They just had to treat Falk like some kind of visiting celebrity alien. They couldn’t be decent about it. They had to be assholes. 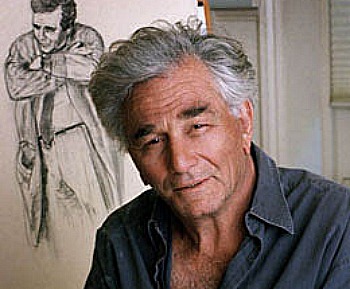 And I remember how the perturbed Falk walked right by me as these jerks were taunting him and making their little lame-ass cracks, and how he was trying to ignore them but at the same time was fiercely cussing and not all that quietly, going “Jeezus!….Jeezus!” I remember thinking to myself and trying to telepathically say to Falk, “Yes, yes…keep going! Turn around and let’ em have it! You can do it, Peter!”

Did Falk ever have a movie role in which he hit it out of the park? Did he ever even hit a long triple? Yes — in Raymond De Felitta and Paul Reiser‘s The Thing About My Folks (’05). Which nobody saw, of course. He was also memorable in a relaxed and settled and kindly way in Wim Wenders‘ Wings of Desire (but less so in Far Away, So Close). And he was especially fine (and perhaps delivering his career best) in John Cassevettes‘ Husbands and A Woman Under The Influence.

I saw him play the desperate Shelley Levene in an early ’80s Hollywood stage production of David Mamet‘s Glengarry Glen Ross. It wasn’t entirely successful as Falk didn’t seem to understand or accept that you can’t play around with Mamet’s dialogue — you have to say it exactly as written.

The poor guy began to succumb to the vicious destroyer known as Al Z. Heimer a few years ago. Not an easy way to wind things down. Getting old isn’t for sissies. Falk was a very fine artist in his time and place, which, as it turned out, was pretty much his whole life.

To this day I can’t remember which eye was the glass fake and which was real.