When I buy a Bluray of an older film that I’ve seen several times in various formats (projected, broadcast, cable, VHS, DVD), I want it to look better, dammit. It has to be an improvement of some kind — sharper and more vivid, deeper blacks, that “straight from the lab” look…something. In this regard Fox Home Video’s Bluray of The Hustler is a disappointment. It looks exactly like the DVDs I’ve been watching over the last decade or so. In fact, it looks a bit soft at times. The more I watched, the more my spirits sank. 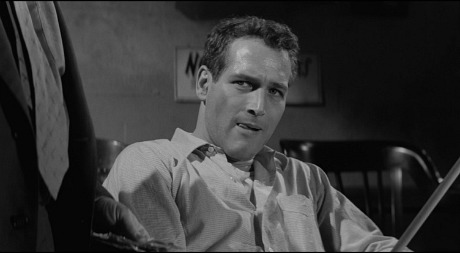 I don’t want DVD quality when I buy a Bluray — I want more. I don’t care if that means the film looks DNR-ed to some extent — I have to get that sense of seeing something better or cooler or “extra” on some level. So call me an unsatisfied customer. It’s a nice rendering and good enough, but I paid money for this Bluray (hard cash at Kim’s) and I feel a wee bit flim-flammed.

“You wanna Bluray of a black-and-white film you’ve loved all your life?,” says the carnival barker. “Well, here it is!” But it doesn’t look any different, you say. Well realized as far as it goes, but not the least bit improved, as it were. It’s fine but I’ve seen this version before…exactly. “But it’s a true capturing of what the film actually looks like!,” says the carnival barker. “And that’s our task…to make our Blurays look as good as the film, in the truest sense imaginable. And you know if you pop in the most recent DVD of The Hustler of your 50″ set this new Bluray will seem like an improvement.”

But not the kind I want, I’m thinking. I’m nodding and feigning acceptance and kind of half-smiling at the guy, but I don’t like it.

Update: In his 5.13 Bluray.com review Jeffrey Kaufman called this disc “absolutely gorgeous.” He said that the film’s special edition DVD from a few years ago “looked pretty spectacular itself, and that same sharpness and clarity is only increased on this new release.” No, no…that’s just it. The Bluray looks fine but the resolution has not been heightened, increased, sharpened, etc. It’s the same thing only bigger….that’s all.