The Manhattan-based Edith Zimmerman has written a rash and brash but nicely phrased profile of Captain America star Chris Evans in the July GQ (“American Marvel“). It’s actually more of a first-person, the-dog-ate-my-notes, this-is-how-I-kind-of-screwed-things-up confession piece, which is what I like about it. It’s kind of a Hunter S. Thompson approach to a 21st Century celebrity profile from a tradition-defying, Bridesmaids-influenced, hang-it-all journalist who isn’t much for kissing celebrity ass. 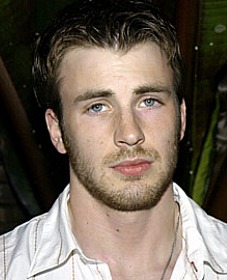 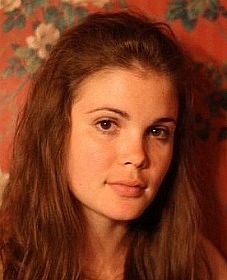 Or…no, wait. She is into “celebrity ass”, so to speak, when she’s doing the interview and hanging out and drinking (and God knows what else), but then she goes back to her place and writes the piece and it’s not really about the subject, which is what all ass-kissing profiles are necessarily focused on, right?

In writing the article this way Zimmerman has mainly portrayed herself and her issues (which may or may not involve wine-sipping, but definitely include a comme ci comme ca “what, me worry?” professional demeanor), and has revealed that she’s only slightly interested in Evans. But you learn enough about him, and about her, and you end up wondering if anything might have…uhm, occured between them because a lot of boozing happened and she wound up crashing at his place and then hitching a ride home.

What the article is really saying is that Zimerman thinks Evans is a little bit boring. She finds him hunky and hot and all that, but in the final analysis she can’t rouse herself to seriously inspect and consider every last detail about the guy because he’s just a dude from Boston who grew into a good-looking egotist. On top of which she finds her own longings and vulnerabilities to be at least as intriguing as Evans, if not more so.

Zimerman has the same nervy and irreverent blood, I suspect, that runs through Diablo Cody and Kristen Wiig and other cool ladies of the moment. 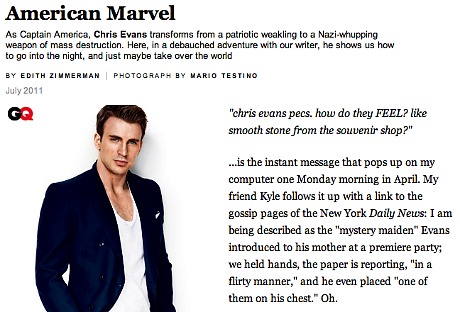 Paramount wil release Captain America: The First Avenger , a Marvel property, on 7.22. Evans will also costar in The Avengers, which will come open in May 2012.

I wrote the following to Zimmerman a couple of hours ago:

“I’m Jeffrey Wells. I write www.hollywood-elsewhere.com on daily/hourly basis. And I’ve just read the Chris Evans GQ piece. I thought, all in all, that the excellent writing balanced out what some might characterize as the drunken, undignified, un-reporter-like behavior.

“Or, put another way, that the drunken, undignified, un-reporter-like behavior acquired a certain confessional splendor — a go-for-broke, fuck-it-all Hunter S. Thompson quality — via the honesty and resultant vulnerability, and the quality of the writing.

“I think what you wrote was well-sculpted and brave, as you had to know you would draw a certain amount of flak for what traditional-minded journos would no doubt describe as an un-professional approach to a celebrity interview, blah blah.”