Columbia Journalism Review reporter Joel Meares has written a reasonable, fair-minded, occasionally amusing profile of Hollywood Elsewhere (and myself, of course). I don’t know what else to say except I’m glad that it’s balanced and kind and accurate and respectful. And not caustic or snippy. Thanks much to Awards Daily‘s Sasha Stone for saying all those nice, perceptive things. 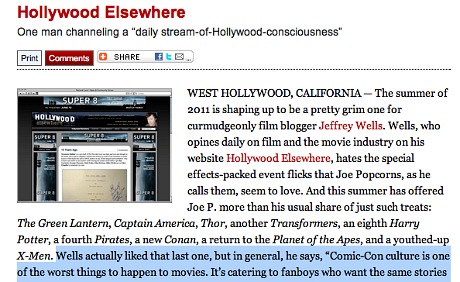 I asked Meares to make two minor changes and he refused. I asked him to list a couple of other big names who read HE and he said “naahh.” Then I said it sounds more natural and conversational when you say “over and over again” instead of “over again,” which is how he quotes me in the piece: “[ComicCon is] catering to fanboys who want the same stories told over again.” He replied that “while I agree ‘over and over’ reads better, it’s not what you said when we spoke.” To which I responded, “I only used one ‘over’ in that portion of our chat and that‘s why you’re sticking with it? Seriously? Okay.”

This is what some hardcore journalists are like. If you’re talking to an interviewer about Sarah Palin and you mistakenly call her Sarah Kalin, they’ll write in the piece “he called her Sarah Kalin, although he was obviously referring to the Alaskan rightwing celebrity-politician.”

Favorite passage: “The stories about bad WiFi service, split pants, and appropriate modulation may turn some off, but if you stick with him, Wells’s Hollywood Elsewhere is a brash, fun read. You might even come to like the man grinning at the top of the page. ‘I really think the personal stuff is what makes his blog so compelling,’ argues Stone. ‘He puts out a good picture of his world — he comes off as an imperfect person –his readers feel protective of him and can relate to him. When they click on the page they are stepping into his virtual world. No one else in our field really offers that.”