I had a persistent thought while watching Chris Weitz‘s A Better Life (Summit, 6.24) that Damian Bichir has given the best male lead performance I’ve seen this year. Yes, better than Brad Pitt‘s permanently-pissed-off dad in The Tree of Life and as strong and winning as Paul Giamatti‘s small-town wrestling coach in Win Win. Most of the award-worthy performances will emerge after Labor Day, of course, but Bichir is a contender right now.

He portrays a Los Angeles-based illegal alien who works as a tree surgeon and has a son (Jose Julian ) who pities and half-despises his father for living such a marginal, hunched-over life, and who’s dealing with the theft of a pickup truck he’s just bought with borrowed money.

I knew Bichir, whose performance as Fidel Castro in Steven Soderbergh‘s two Che films I also admired, had dug into the heart of this sad but dignified character. And that he certainly looked the part with his tattered work duds and slightly beefy physique and half-bearded face and baseball cap and look of exhaustion. But what really convinced me was Bichir’s appearance as he entered the J restaurant and lounge on South Olive last night. He looked much lighter (having gained about 15 pounds for the role) and was wearing a perfectly tailored all-black tuxedo, and basically looked like an Italian GQ model.

We did about a six- or seven-minute interview on the outdoor patio while the party raged inside. 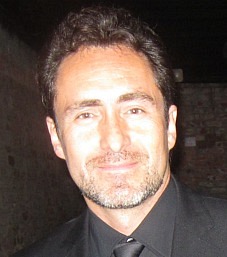 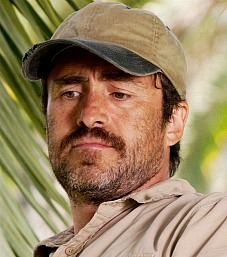 “Life keeps jabbing and slugging Bichir’s character — bitchslapping him, kicking him in the shins and delivering one form or another of trial and humiliation,” I wrote on 6.8, “but he keeps on plugging and holds onto his dignity and humanity. In the end he wins your respect and affection.

“He also manages to win the respect and love of his son, who’s regarded him with mostly pity and contempt throughout most of the film. This achievement is pretty much what the film is about. Like Vittorio De Sica‘s The Bicycle Thieves, A Better Life is not about winning or beating the system or lucking out.

“Bichir and Julian’s performances are as solid and open-pored as it gets. They share an emotional confession scene near the very end that pretty much ties the whole film together.”