Two days ago Movieline (which goes to sleep on weekends) noted that Raiders of the Lost Ark opened exactly 30 years ago — on June 12, 1981. It cost $18 million to make and earned $384 million and change worldwide. 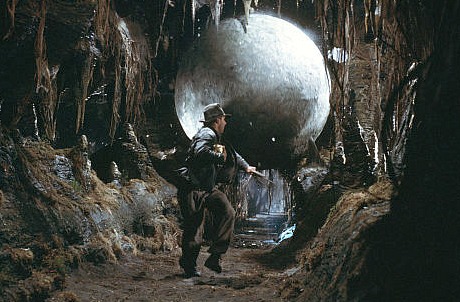 This, for me, was the movie that finally persuaded Hollywood that infantile Spielberg-Lucas fantasy-trip movies were the thing to invest in or at least try to imitate, and that dark/smart moody movies about narcotics detectives and oddball-rebel piano players and doomed extra-marital love affairs probably weren’t worth the trouble.

I remember muttering to myself after seeing Raiders the first time, “Very cool movie and a lot of fun, but things are going to be a lot of shallower from here on in…this may be the beginning of the end for depth and angularity and middlebrow introspection in mainstream Hollywood cinema.” Did Spielberg and Lucas cause this to happen? Did the Pied Piper of Hamelin not lead the children away from the village? Lucas-Spielberg showed Hollywood a way to make much more money from movies that were much thinner and more winky-wink popcorn with high-end production values and John Williams music, so in a way, yeah….they did.

The fault, dear Brutus, is not in our stars but in ourselves, that we are underlings.

The second time I saw Raiders of the Lost Ark was at an all-media screening inside the ground-level theatre at Leows’ State at Broadway and 45th. When it was over and the lights came up and everyone was leaving I realized I was slowly walking behind John Belushi and Dan Aykroyd, who at the time were shooting Neighbors. They were just shuffling along, not talking to each other, and nobody was paying any particular attention to them.

But I was two or three feet away from Belushi, and I did hear him suddenly say to no one in particular, “Yeaahhh.” I knew what he meant by that. He was saying, “I’ve worked with Spielberg and this is what he does, all right. I’m no genius but I’m kind of a subversive comedian….right? My schtick? And Steven, as good as he is, is probably one of the least subversive filmmakers around. Nobody can beat him at this kind of thing and this movie is going to make a boatload of money, and on some level…well, I’m not sure that I feel all that good about this because I’m not sure if I fit into Spielbergworld all that well….although I liked the money I made for doing 1941. But otherwise fuck me. I’m gonna be dead next year.”