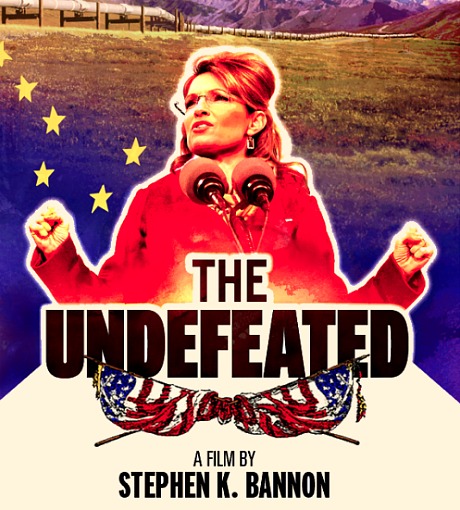 I too am planning on attending next week’s Dolby pressathon in San Francisco on 7.1 Surround Sound. Besides MCN’s David Poland, I mean. I’d been looking forward to a wholesome and stirring learning experience. “Uhhm, I don’t want to look in your direction…I’m looking through you…you’re not there…if I don’t maintain my Islamic jihad stance I won’t be a man,” etc.

A lowbrow comedy that racks up a lower-than-15% Rotten Tomatoes average, as The Zookeeper (Sony, 7.8) has so far managed, has nothing to worry about as far as the family-viewing crowd is concerned. Kevin James‘ latest, produced by Adam Sandler‘s Happy Madison crew, is allegedly reprehensible, and it’ll do just fine this weekend with the millions who loved Night at the Museum, which The Zookeeper is basically aping.

Best slapdowns: (1) “Smells like the monkey house before cleaning time.” — Hollywood Reporter‘s Todd McCarthy. (2) “If a worse movie is released this year, I hope I don’t have to see it.” — MSN’s Glenn Kenny; (2) “Lock the cage and throw away the key.” — Boxoffice.com‘s Pete Hammond; “If we could talk to the animals, they’d probably hate it too.” — Associated Press critic Dave Germain.

Today a photo and a transcription of a 2.9.60 fan letter written by Stanley Kubrick to Ingmar Bergman (i.e., while Kubrick was working on Spartacus, as indicated by the Universal-International letterhead stationery) was posted. 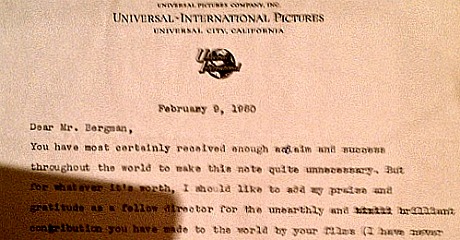 Question: Can anyone imagine a reputable director today writing such a letter to Zack Snyder? If so, could they imaginatively compose such a letter themselves and send it along?

“Dear Mr. Snyder: I should like to offer my praise and gratitude as a fellow director for the unearthly and brilliant contribution you have made to the art of opening-credit sequences. The opening-title portions for Sucker Punch, 300, Watchmen and Dawn of the Dead were truly thrilling. Seriously — I’m not being facetious. Trust me when I say that I am literally breathless with anticipation for the Man of Steel credit sequence. Your vision of what credit sequences can be has moved me deeply, much more deeply than I have ever been moved by any films,” etc.

The names of the dwarf brothers from Peter Jackson‘s The Hobbit: An Unexpected Journey, opening on 12.14.12, are actually Snoopy, Gloopy and Picknose. No, seriously — Dori, Nori and Or. The players (l. to r.) are Jed Brophy, Adam Brown and Mark Hadlow . 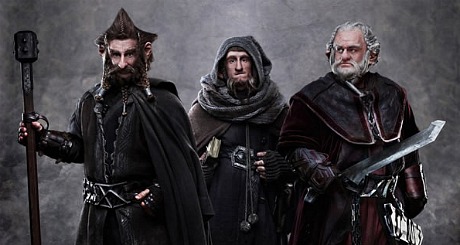 That long-running News of the World phone-hacking scandal has finally torpedoed Rupert Murdoch‘s British tabloid. The 168-year-old publication (Dickens almost certainly read it) will close on Sunday, 7.10, in an attempt to flush out sewage backwash from the Murdoch empire.

“The good things the News of the World does…have been sullied by behavior that was wrong,” said James Murdoch, son of Rupert, in an official statement. “If recent allegations are true, it was inhuman and has no place in our company.” “If“?

“The move to close The News of the World was seen by media analysts as a potentially shrewd decision: jettisoning a troubled newspaper in order to preserve the more lucrative broadcasting deal and possibly expand the company’s other British tabloid, The Sun, to publish seven days a week.” — from Sarah Lyall and Brian Stelter‘s N.Y. Times story on the development.

Additionally: “British Metropolitan police have informed Andy Coulson, former media adviser to British Prime Minster David Cameron, that he will be arrested Friday in connection with the News of the World phone-hacking scandal. Coulson, who resigned as Cameron’s director of commuications in January, was contacted by detectives on Thursday and told to appear for formal questioning on Friday.”

Wells to Paramount publicity: About a week ago Variety‘s Jeff Sneider tweeted that Paramount has decided to change the title of Martin Scorsese‘s Hugo Cabret to Hugo. And now Rope of Silicon‘s Brad Brevet has just gone with Hugo in a preview piece. Did I miss an official confirmation? 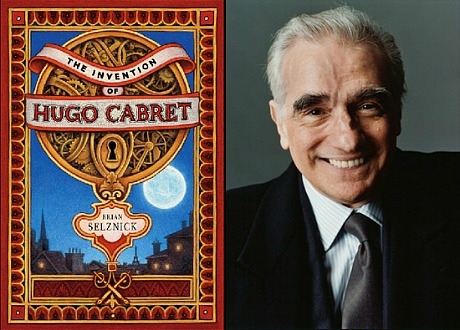 If Hugo Cabret‘s title has indeed been dumbed down, is it because Paramount marketing research indicated that your average rural American might be thrown and perhaps turned off by the word “Cabret”? As in: “Hmmm…sounds kinda French. How d’ya say it….CaBRETT? Hugo CaBRAY? Arty-farty…right? Later.”

That little glimmer of pleasure in Meryl Streep‘s eyes and mouth as she explains what’s important, nay, essential in her presentation to the British electorate is so friggin’ Oscar-baity it’s not funny. Forget it, game over, she’s nominated. Like I said the other day, it’s Streep vs. Glenn Close in Albert Nobbs vs. Charlize Theron in Young Adult plus two others.