New Yorker critic David Denby sharply disagrees with Peter Debruge‘s recent Variety rave of Crazy Stupid Love, which has its all-media screening tonight at the Arclight. I’m telling you right now tonight may be a defining moment for Debruge. If I decide he’s a little too far off the mark on this film, his trustworthiness will have to be reconsidered. 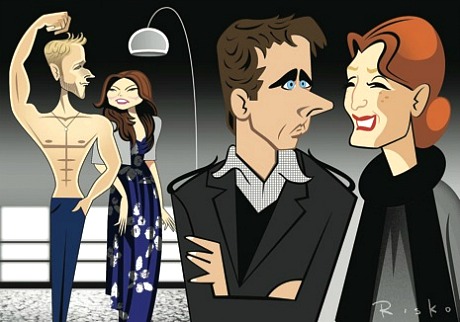 Denby’s main beef is that it doesn’t seem to matter that much if Steve Carrell‘s Cal and Julianne Moore‘s Emily decide to cancel their planned divorce or not. Denby then makes a good point about how couples who seem to well-matched tend to speak to each other.

“In the remarriage classics (The Awful Truth, The Philadelphia Story, His Girl Friday), the former partners have a way of talking and being with each other that they don’t have — and couldn’t possibly have — with anyone else. That sophisticated metaphor for sexual compatibility made for uniquely satisfying romantic comedy.” But Cal and Emily “met when they were in high school,” he notes, “and, apart from reminiscing about that time, they don’t have much to say to each other.

Crazy, Stupid, Love regrettably “holds to the boring modern convention that good people are inarticulate, and Cal and Emily mainly stumble around trying to fill the silence.

“Moore may be too earnest an actress for rigidly structured commercial comedy. She tries to find some hard truths in the role, and she makes Emily angry, vague, and even a little dim. The character is parched and not very likable.

Carrell “always conveys the sense that he’s a rational man trying to keep his integrity,” and he “seems more comfortable acting with Ryan Gosling than with Moore. Cal has his mishaps and his successes, but the filmmakers believe in soul mates forever, and that kind of thing, and the audience may not want to think about the aftermath of the movie, in which Cal and Emily discuss, again and again, that magical year they met in high school.”