Comedies aren’t funny unless they contain at least some of the respect for genuine human experience that dramas do. Sorry to be a scold, but comedy writers need to represent the way it actually is out there. If they don’t do that and just make up exaggerated farcical crap, intelligent audiences can’t and won’t recognize anything they’ve written as life-like, and therefore won’t laugh. 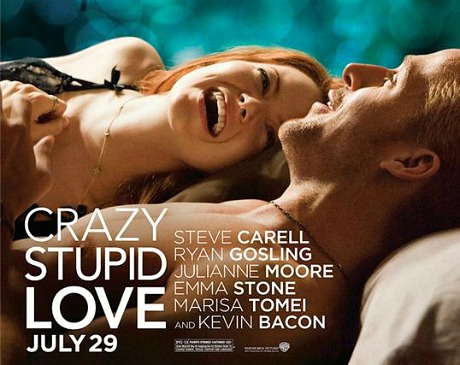 A failure to do this on the part of top-dollar cyborg-screenwriter Dan Fogelman is the main reason why Glenn Ficarra and John Fuqua‘s Crazy, Stupid, Love (Warner Bros., 7.29) is one of the most revoltingly phony, profoundly sickening “romantic comedies” I’ve ever seen.

I hated Crazy with a passion because it has no respect for real-world human behavior. Nothing about it feels the least bit true or reflective of modern life as most of us (with the exception of certain filmmakers) know it. Wafer-thin characters, ludicrous sitcom plotting, outrageous fakery of all kinds, absurd over-emoting, ghastly dialogue, etc. What were Ficarra and Fuqua and Fogelman trying to do? Establish a new high-water mark in synthetic “humor”? I was okay with Ryan Gosling‘s performance as far as it went (he plays a super-slick, somewhat robotic pickup artist) but otherwise I didn’t believe a single word, bit, moment or emotion in this film. Nothing.

How can a flagrantly square, middle-class, big-studio comedy misrepresent straight life (middle-aged marriages, single women, teenagers, the mentality and patter of hounds, the behavior of attorneys) this badly? Crazy is so off-the-charts fakey-crazy that it’s breathtaking. It was so bad that I cried. Any episode of Curb Your Enthusiasm — Larry David‘s landmark-level, wonderfully acidic comedy series — is Eugene O’Neil compared to this.

I was initially intrigued when I read Peter Debruge‘s recent rave of Crazy, Stupid, Love in Variety. But right after I posted it I heard from a critic friend who called it “phony fucking bullshit of the highest order, an utter wad of falsehood shot through with behavior no human being would actually engage in.” How could two indisputably bright fellows disagree so strongly?

I figured it out pretty quickly once Crazy, Stupid, Love began playing earlier this evening. Debruge, I realized, has a very, very different sensibility than mine. That’s a polite way of putting it, I think. Ditto David Edelstein, Pete Hammond, Caryn James, Mary F. Pols, Emmanuel Levy and all the rest of the Rotten Tomatoes supporters.

Crazy, Stupid, Love is about a middle-aged couple (Steve Carell, Julianne Moore) breaking up due to Moore wanting a divorce, and then both of them trying things out as singles, and…you know the rest. Carrell pals up with Gosling-the-ladykiller at this one effing bar (which they keep returning to over and over and over and over). Gosling mentors the insecure, dipshitty, relentlessly dull Carell on the art of seducing women, etc. New wardrobe, new haircut, pickup lines, blah blah blah blah blah.

Eventually Carrell gets pretty good at it, but of course, being one of those guys who needs his soul-mate (one of the most loathsome, hoodwinky terms in the English language), he can’t settle into singlehood and neither can Moore and yaddah-yaddah, etc.

I’m taking this opportunity right now to say screw the concept of soul-mates in movies. Good for you if you’ve found one in real life but movies about them are utterly dreadful to sit through.

Emma Stone plays Hannah, a young attorney whose connection to Carell-Moore seems nonexistent at first. She gets hit on by Gosling and turns him down, and then realizes that a law-firm hotshot she’s in love with doesn’t feel the same way about her, which prompts Stone to all-but-destroy her professional prospects at this firm (brilliant!), and then leads her to return Gosling’s advances, etc.

You don’t care. I didn’t care. Only Anne Thompson (whom I spoke to in the Arclight lobby after it was over) and people from her aesthetic corner of the woods care. “What romantic movies do you like?,” I was asked. “The Year of Living Dangerously,” I replied. “Notorious. The Visitor. Witness.”

There’s also Carell’s 13 year-old kid (Jonah Bobo) and the babysitter he’s in love with (Analeigh Tipton), and the acutely uncomfortable fact that Tipton has the hots for Carrell.

The way Moore tells Carell that she wants a divorce in scene #1 is forced and phony. A scene in which Carell’s pal (John Carroll Lynch) tells him they have to break up because his wife told him they have to choose between being friends with either Moore or Carell but not both is truly sickening. A scene in which Marisa Tomei, a schoolteacher who happens to have been Carell’s first post-marital conquest, totally risks her job and professional reputation during a parent-teacher meeting is completely ridiculous, unfunny and also sickening. A scene in which Bobo tells Tipton that he’ll resemble his father when he gets older is bullshit as he’s clearly no spawn of Carell or Moore — he looks like the son of a Lithuanian coal miner. I could go on and on and on.

Nearly every scene in this film blows in one way or another. A scene of intimacy between Gosling and Stone is one of the few that work. That’s the most supportive thing I can say.

By all means join the simpleton party this weekend and pay to see Crazy, Stupid, Love and have a good time chuckling. I’m presuming it’s going to make a fair amount of money. Let’s see what develops. But understand this above all: Crazy Stupid Love is a burn.