Let no one doubt that Hollywood Elsewhere is an influential, shaker-upper column. Not just in terms of influencing the conversation about Oscar nominees and the Best Picture race. But also in terms of getting people fired. Or one guy, at least. Which doesn’t feel very good if the facts are what they seem. Call me chagrined and somewhat appalled.

I learned a few hours ago that Ivan Infante, a screenwriter and maker of short films who’s been the most friendly and recognizable face at West L.A.’s Laser Blazer for nine years, was canned last Wednesday by owner Ron Dassa, and that one factor in his termination was a piece I ran on 7.20 — 11 days ago — about the sagging fortunes of Laser Blazer. It was called “Saddest Video Store.”

Like all retail video stores Laser Blazer has been going downhill for the last couple of years, so Dassa would have had to cut bait sooner or later. The business has been running at a loss, so Infante, who’s been the store’s product buyer for several years, figured the blade would drop by September or October. It happened sooner, he strongly suspects, for reasons of spite and revenge over the 7.20 article.

Infante says Dassa told him it was also because the article made him suddenly realize that the business was doomed, despite Dassa having assessed Laser Blazer’s financial situation on a regular basis all along. That’s bullshit, of course.

But there does come a time in every dying business when an owner realizes he needs to reduce overhead. Dassa claims he had to cut Infante because he couldn’t afford to pay his salary. Okay, I believe that part. But not 100%. 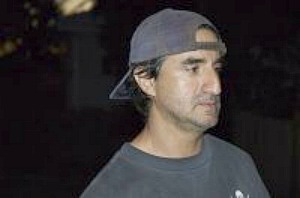 The first email blast I got was that Infante had been whacked because of the piece. But what was in the article that was so damaging to Laser Blazer’s income or rep? “Business is down,” I wrote. Hello? Video retail is down everywhere. “The mood is down,” I wrote. As it naturally would be inside any store that feels like a storage closet due to a lack of air-conditioning. “Excess inventory is being sent back to distributors”…is that what ticked Dassa off? “And the air conditioning is on the fritz, and in fact hasn’t been repaired for several weeks,” I wrote. That was a simple climatorial fact. You can’t run a business in the summer without a.c.

So Dassa was angry at Infante for sharing honest and/or obvious information about the store’s diminishing business, and particularly for sharing the fact that Dassa had refused to fix the air-conditioning system since it stopped working last February, and he wanted to take revenge because Infante, he felt, was using HE to agitate Dassa to get the a.c. fixed. Or something like that. It sounds semi-plausible to me.

I just don’t see whacking a good employee after he’s been with you for nine years without showing a little kindness. Dassa offered no goodbye severance check, no farewell party, no thanks or hugs….just a chilly, straight-from-the-shoulder “you tried to pressure or embarass me about the air-conditioning so you’re gone…sorry.” I don’t blame Dassa or any businessman for cutting costs when he’s forced to, but I wouldn’t cut a guy loose who’d been with me for nine years without giving him a little renumeration and maybe a farewell dinner or something. End it with a little class and grace.

If anyone in any aspect of video business is reading this, understand that Infante knows film backwards and forwards and that he’s very good with people and that he’s loyal and trustworthy and considerate and well-liked, etc.

Here’s the piece that caused the ruckus.