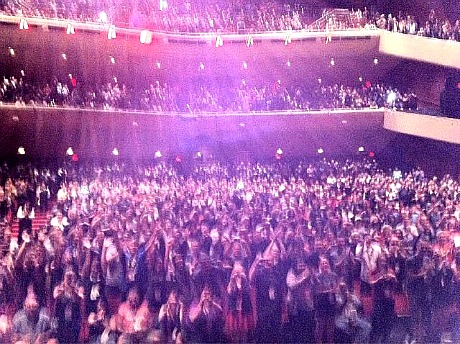 This doesn’t entirely square with a view by TheWrap‘s Tim Kenneally that Cowboys & Aliens is “an action flick from head to tentacle” — a “Gunfight at the O.K. Corral meets Independence Day” that “will not be lauded for its emotional complexity” and is “not entirely out of this world.”

Deadline‘s Luke Y. Thompson didn’t run a review, but he’s reported that it’s a spottily flawed, somewhat superficial film, but that the fans loved it, particularly the violent scenes, and double-particularly those between Harrison Ford and Daniel Craig.

Debruge calls it “a ripping good ride” and “a full-bodied, roundly satisfying yarn, positioning [the film] to join the half-dozen Westerns to crack the $100 million club.”

Honeycutt calls Cowboys & Aliens “a solid success. For a tent-pole, Comic-Con movie, this one devotes a gratifying amount of time to character and achieves most of its success because Favreau has intelligently cast his film and let his actors do their thing…as good as the visual effects are, you walk away from the movie with a memory of actors’ faces, lines of dialogue and actions that speak more to character than to shock-and-awe.”

HE’s Michael Merlob couldn’t get into the screening, but says he’s “heard mostly good things. Some folks are saying it has plot holes but is well-executed overall. Reactions seem generally positive.”