The problematic 1950s theatrical technologies known as Smellovision and Aromarama are dead and gone and will never return. And subsequent attempts to bring odors into movie-watching are nothing to hold onto either. The scratch-and-sniff Odorama process used for John Waters‘ Polyester was lame. And a new version being used with Robert Rodriguez‘s Spy Kids 3-D: Game Over, a kind of swipe-and-smell deal called AromaScope, is another cheap trick. 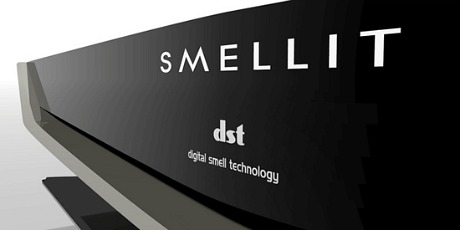 The Rodriguez film is in 3D so the added-aroma element creates what they’re calling a 4D experience.

I for one would love it if Smell-o-vision worked — if there was a super-effective, high-function theatrical technology that dispenses aromas to go along with whatever’s being shown on the screen, and then quickly vacuums that aroma back to make way for the next olfactory immersion.

It would be nothing short of ecstatic to watch Lawrence of Arabia this way. Imagine savoring convincing simulations of the aromas of the Nefud desert, of camel shit and tobacco smoke in the British officer’s club, of oranges and grapes in Damascus, and the muddy streets of Daraa.

It’ll never happen in a theatre, but what if some kind of home-based aroma dispenser could be hooked up to specially coded Blurays of new and classic films? It could add a whole new element of serious immersion. I would install this system in a heartbeat if it really worked.

Imaging smelling North by Northwest — the aroma of 57th Street in the late afternoon, the splattering of bourbon onto Cary Grant‘s gray suit, the scent of a warm plate of brook trout and a Gibson martini on the 20th Century Limited, the aroma of sex and Arpege perfume in Eva Marie Saint‘s sleeping compartment, and so on.

Imagine the wet-dog smell of Wookie hair in Star Wars, and the horrible gut stink coming from that dead Tauntaun that Han Solo opens up with his light saber in order to provide warmth to Luke Skywalker in The Empire Strikes Back (“I thought they smelled bad on the outside!”). Imagine the smell of armpit sweat and stale air and Manhattan rainstorm aroma while watching 12 Angry Men. Imagine the aromas that would accompany a smell-o-visioned Inception — the sea water, the Paris streets, the scent of nearby pine trees and damp snow covering that mountaintop fortress, etc.

There would be very few films that wouldn’t be enhanced with this technology, should someone invent a version that really and truly performs.

There’s a Japanese-produced technology that has introduced aromas into theatres and homes, but the home version, which reportedly costs about $750 or so, works through a machine that “has to be topped up with fragrant liquids which create the scents.” That sounds tedious.