I don’t know what I’d do if a supreme authority were to tell me I’ll no longer be allowed to see any more Asian films about (a) “young Japanese women whose breasts double as machine guns,” (b) “light-on-their-feet martial arts caper[s],” (c) “reasonably credible seventh-century mystery stories with supernatural elements” by way of Asian kung-fu, (d) “a beautiful courtier using her martial-arts skills to dress herself while dodging hundreds of arrows,” and blah blah. But I’d be upset. 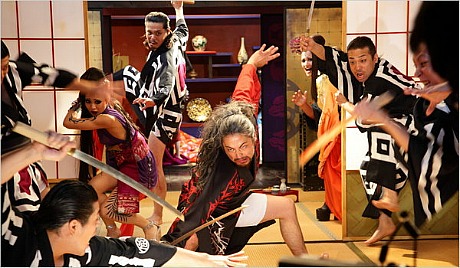 Actually, make that really upset. I imagine I’d be shouting and writing angry emails and stamping my feet in protest. But after an hour or so I’d probably exhale and nod my head sagely and look at the supreme authority in the face and say, “All right, okay…I don’t like this but I accept it. I’ll no longer have the joy of pulp-popcorn Asian cinema in my life but c’est la vie.”