20th Century Fox’s Rise of the Planet of the Apes opens this Friday, and the town’s big-gun critics only just saw it tonight. Correct me if I’m wrong, but the standard term for showing a movie this late in the game is “hide the ball.” Which publicists tend to do when the movie in question isn’t very good. Except Rise of the Planet of The Apes is really good. It’s easily the best Apes movie ever made, and that includes the original. 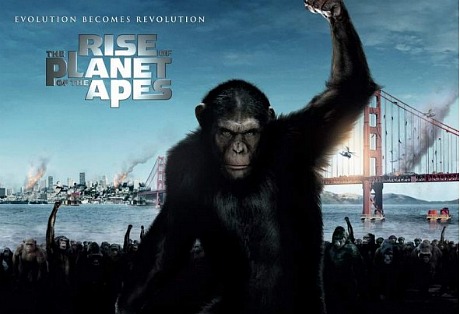 Rise is sharper, tighter, more emotional…lacking a Statue of Liberty finale, okay, but nonetheless with a “better” story in a sense. And without the perfectly styled, Vidal Sassoon ape coifs that bothered me so in the Charlton Heston original. Not one orangutan had a single hair out of that place in that film, the reason being of course that the prosthetic makeup guys felt more compelled to represent the sartorial values of Beverly Hills, ape-appearance-wise, than the corresponding particulars in a world first imagined by French novelist Pierre Boulle.

So what was 20th Century Fox thinking? Why didn’t they show the whole thing at ComicCon instead of just clips? Why did I have to ask to attend tonight’s screening? Why did Hitfix‘s Drew McWeeny, who knows fantasy-genre stuff better than most of us, have to plead to get in? I don’t get it. And telling reviewers to hold until Thursday is just…what? This is a really good film. It’s not out of line to say that a franchise has probably been reborn, if they want to go there.

And don’t listen to guys like Lewis Beale, who earlier this evening called Rise a “fun, not-intellectually-taxing summer entertainment.” C’mon…it’s much better than that. It’s a compassionate look at imprisonment and oppression, and a rousing saga of rebellion and revolution. And it all levitates courtesy of some of the best motion-capture CG I’ve ever seen.

Okay, the apes seem a little too “CG”-ish and animated here and there but let’s not be crabby. This is a very strong, very on-target entertainment.

What could have been just another blah-blah origin story has been turned into a simian Spartacus….or more precisely the first act of Spartacus, which ends with the slaves breaking out of the gladiator school in Capua. That’s precisely how Rise concludes, so to speak. 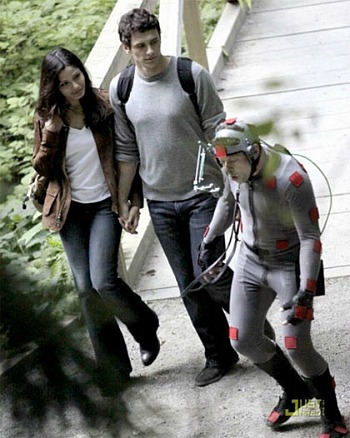 James Franco plays a nice-guy genetic scientist — intelligent, tactful, bland — who’s trying to find a cure for Alzheimer’s Disease by performing serum tests on apes. He soon realizes that a serum given to a chimp mother named “Bright Eyes” (remember who had that nickname before?) has been passed along to an orphaned baby chimp named Caesar. The little chimp soon proves to be a major-league achiever and learner. Franco also tries out the serum on his Alzheimer’s-afflicted dad (John Lithgow), and it’s Awakenings all over again. But Ceasar’s passion and curiosity leads to complications and the authorities seize and lock him up.

This is when the Spartacus stuff kicks in. We’re not going to take this any more, fellow apes, and I’m the one to lead you guys out of this, because I’m smart and ballsy and a good strategic thinker. (Harry Potter costar Tom Felton plays roughly the same part that Charles McGraw played in Spartacus. Or the “Fritz” role that Dwight Frye had in Frankenstein.)

Franco hooks up with the beautiful Freida Pinto early on, but this is of no consequence as she has no extended dialogue scenes of any kind. As always, she’s very pretty. She obviously has to do more that just look great if she’s going to last. Her best chance at showing what she’s got will probably come with Michael Winterbottom‘s Trishna, an Indian-set adaptation of Thomas Hardy‘s Tess of the d’Urbervilles.

The apes are the soul and the spirit of the film. They’re fascinating, fully-emotional and fully-dimensional characters. Much of Rise is non-verbal, and appropriately so. Serkis, I should add, tends to over-emote at times. The facial expressions he gives to the young Ceasar — the lead ape protagonist — are just a tad too expressive for my taste, a wee bit too “actor”-ish. But I’ll probably be in the minority on this issue. There’s already talk about Serkis deserving a Best Supporting Actor Oscar nomination. I would have no argument with that at all. The AMPAS actors branch, traditionally fearful of CG-emoting, will probably try to nip this notion in the bud.