Remember Steven Soderbergh intimating during a ComicCon panel last month that perhaps he might not retire after all? The first journalist to draw this conclusion, or so I recall, was Movieline‘s Stu Van Airsdale when he posted a riff that was titled “Steven Soderbergh Apparently Not Retiring After All.” But read past the headline and Soderbergh didn’t really say or imply anything like that. 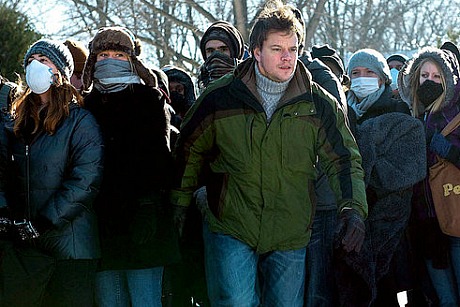 Soderbergh said that Matt Damon was indiscreet in passing along “this drunk conversation [I had] with him while shooting Contagion” in which SS said he wanted to get out of directing. He also said that “nobody in this economy wants to hear about someone quitting a good job…[so] that kind of got blown out of proportion, and that’s Matt’s fault.” If anything Soderbergh blurting out his feelings about quitting directing while drunk suggests that he meant what he said, and saying that his remarks about same “got blown out of proportion”…I don’t know what that means.

In any case Soderbergh is retiring, according to Dennis Lim‘s 8.28 N.Y. Times story about Soderbergh’s latest film, Contagion (Warner Bros., 9.9). Or he’s committed, at least, to what may turn out to “a Frank Sinatra retirement,” as I described it a couple of months ago — i.e., two or three years of painting and then back on it.

“Mr. Soderbergh was speaking last month in his office space-cum-painting studio in the Flatiron district of Manhattan, where, having announced his imminent retirement from directing, he will soon be spending a lot more time,” Lim writes. “Mr. Soderbergh, 48, sounded matter-of-fact about the career change. ‘I’m interested in exploring another art form” — painting — “while I have the time and ability to do so,’ he said. ‘I’ll be the first person to say if I can’t be any good at it and run out of money I’ll be back making another Ocean‘s movie.”

With Haywire in the can and opening in January 2012, Soderbergh will direct three more films before hanging up his jodhpurs and megaphone: (a) Magic Mike , inspired by Channing Tatum‘s time as a male stripper; (b) a big-screen version of the 1960s TV hit The Man From U.N.C.L.E.; and (c) that long-gestating Liberace biopic with Michael Douglas. Wait, shouldn’t Soderbergh direct the Liberace pic first?