This morning the Film Society of Lincoln Center announced a special New York Film Festival showing of William Wyler‘s Ben-Hur (’59), or more specifically a digitally restored 8K version that is the source of the upcoming Warner Home Video Bluray that streets on 9.27. I’m told that the NYFF showing will probably happen on Saturday, 10.1, starting sometime in the morning.

The interesting angle is that the NYFF will be showing the Biblical epic at the full Camera 65 aspect ratio of 2.76 to 1, which may (emphasis on that word) be the very first time it’s been commercially projected on a big screen in this particular format. Maybe.

According to James Bond, president of the Chicago-based Full Aperture Systems, Inc., as well as a respected film expert and historian who asked not to be identified, the 1959 reserved-seat roadshow versions of Ben-Hur in New York and Los Angeles were probably projected at 2.55 to 1. That’s still pretty damn wide (2.55 was the aspect ratio of Fox CinemaScope films from The Robe, which opened in 1953, until sometime in the mid to late ’50s), although not as wide as Cinerama presentations.

The other guy, hedging his bets, says Ben-Hur “may have opened in New York and Los Angeles at 2.76 to 1…I was too young to have noticed.”

The only way 70mm prints of Ben-Hur could have been seen in their full 2.76 to 1 widescreen splendor would have been to project the epic onto an extra-wide Cinerama screen, or like the one that was built for L.A.’s Cinerama Dome in 1963. New York’s Loew’s State, where Ben-Hur premiered in late ’59, never had a Cinerama screen, and I don’t think that the old Egyptian, which is where Ben-Hur opened in Los Angeles, did either.

Why, then, did 70mm prints of Ben-Hur allow for a 2.76 to 1 aspect ratio if no big-time theatres actually showed it this way? Beats me. I’m only passing along what Bond and the other guy have told me, which is that 2.55 to 1 was probably the format. 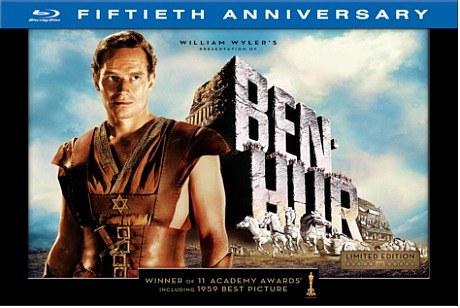 If Bond and the other guy are wrong and Ben-Hur did show at 2.76 to 1 in 1959, then at least the New York Film Festival showing at Alice Tully Hall will mark the first time the classic will be presented in a super-duper-wide format on a big screen in roughly 52 years.

Yes, the 2.76 to 1 version has been viewable on DVD versions in the past, but minus the big-screen pizazz. Even if you watch the Ben-Hur DVD or the forthcoming Bluray on a 50″ or 60″ screen, you’ll be looking at an image that isn’t very high (i.e., really thick black croppings on the top and bottom) and is clearly diminished compared to what Wyler and his cinematographer, Robert L. Surtees, wanted audiences to see. And watching the film at this aspect ratio on 40something- or 30something-inch screens is pretty close to ridiculous. Don’t even go there.

FSLC/NYFF co-honcho Scott Foundas says the widescreen image at Alice Tully (and at the earlier press screening at the Walter Reade) will obviously be less high than standard 2.35 to 1 widescreen projections, but only slightly.

The other thing that needs to be cleared up is that while Warner Bros. archivists have digitallly remastered the restored Ben-Hur at 8K, the NYFF projection (via a Barco) will be shown at 4K. But that will still deliver loads of incredible clarity and detail, probably more than the naked eye can fully detect or appreciate.