In a piece based on a chat with J. Edgar director Clint Eastwood, EW’s Anthony Breznican writes that “while the screenwriter…believes it was J. Edgar Hoover’s suppressed sexuality that twisted him into the ultimate control freak with ultimate enforcement power, the screenplay keeps things somewhat ambiguous. After all, the premise is that failing to be able to feel something for another person is what warped Hoover, leading him to see everyone from Martin Luther King Jr. to Robert F. Kennedy as enemies of the state.” 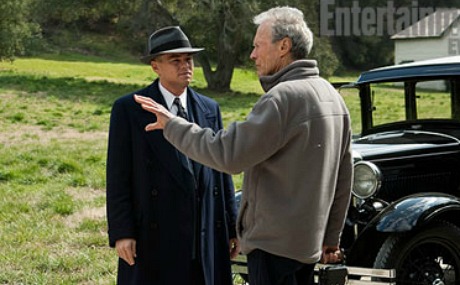 In other words, J. Edgar is, in a sense, a cautionary tale about what happens when you suppress your feelings and deny who and what you are. Which was more or less what Brokeback Mountain was, right?

“Eastwood says he didn’t want to make a definitive statement about whether Hoover was gay, since that history is far from certain: ‘Some people might interpret it that way. Some people might say [he and Tolson] were just inseparable pals. Or maybe it’s a love story without being gay, I don’t know. But it’s very interesting, the way [Dustin Lance Black] laid out the script. It was nicely written. It didn’t go to the obvious.”

Due respect, but the version of Black’s script that I read last year wasn’t as oblique as Eastwood suggests.

Repeating again my April 2010 impression: “The scenes between Hoover and FBI ally/colleague/friendo Clyde Tolson are fairly pronounced in terms of sexual intrigue and emotional ties between the two. Theirs is absolutely and without any qualification a gay relationship, Tolson being the loyalty-demanding, bullshit-deflating ‘woman’ and Hoover being the gruff, vaguely asexual ‘man’ whose interest in Tolson is obviously there and yet at the same time suppressed.”