I ran a piece on 4.14.11 about the decision to remove the words “God of” from Roman Polanski‘s adaptation of Yasmina Reza‘s God of Carnage, and to therefore call it Carnage (Sony Classics, 11.18). I was told by a publicist that day that the decision “was made by the producer Said Ben Said and Polanski.” Most people felt this was an odd call but whatever. The movie’s the thing, right? 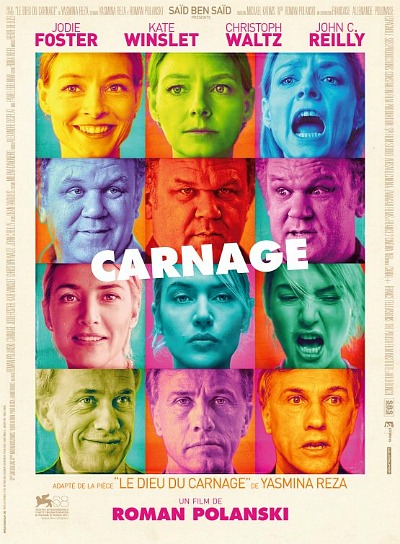 My suspicion is that Carnage was adopted because of the U.S market, and particularly a fear that hinterland yahoos might react negatively to the word “God” not being used in a strictly Christian context. Even if this isn’t true the U.S. is still the most religiously primitive, culturally backward, finger-up-its-ass country in the Western hemisphere, hands down.

The French poster for the film has been released, and while the French acknowledge the original title on the the bottom of the poster, they’re sticking to Carnage.