The well-connected Patricia Bosworth has always been a succinct, carefully phrased writer and a perceptive and trustworthy biographer. (I’ve read her 1978 book about Montgomery Clift twice.) I was reminded of her skills when I began reading a Vanity Fair excerpt from her latest biography, Jane Fonda: The Private Life of a Public Woman earlier today. It also hit me again that the story of Fonda’s life from the early ’60s to early ’70s is a stirring one, particularly in the arc of her relationship with French director Roger Vadim. 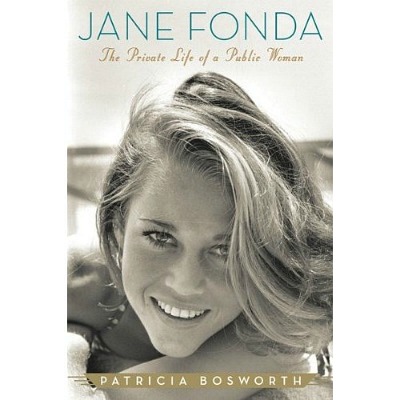 The bottom line is that Vadim was a much more interesting man than he was a director — his films were never very much more than shallow exploitation fare with provocative sex scenes. But he did guide Fonda’s life and soul into realms she’d never known or savored before they met and got going as a couple sometime in ’64. And Fonda did came of age and bloomed in all sorts of ways — sexually, politically, culturally — due to his influence. He orchestrated her metamorphosis from plucky young lass to seasoned European woman.

And then the string ran out in the early ’70s, both having travelled as far as they were able to within their particular realm, having married each other in late ’65. Fonda moved on to feminism and political militancy and Klute and “Hanoi Jane” and Tom Hayden and all that, and Vadim, among other things, went on to make the execrable Pretty Maids All In A Row. He was a flat, terrible filmmaker. (Barbarella is glossy dreck.) Vadim’s great gift was his ability to seduce, marry and exploit beautiful actresses. And to make his life into a great sensual symphony of sorts, I suppose.

It’s a fascinating growth-of-a-woman story (the excerpt, I mean) with a fair amount of frank reporting about the impulsive, swan-divey sexual intrigues of that era. What a time to be randy and alive and hungry! Although the sexual anecdote that I’ve most enjoyed about the young Fonda (however accurate or inaccurate it may be) is contained in Peter Biskind‘s Warren Beatty biography. 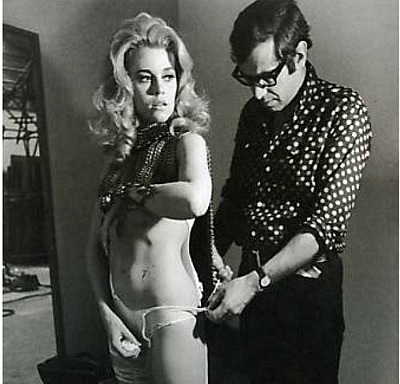 Jane Fonda, Roger Vadim on the set of Barbarella.