Tall can marry short…it happens. But the “birds of a feather” rule is obviously the basic universal aesthetic — super-tall lanky guys hooking up with extra-tall or at least sizable women, shortish women with guys who aren’t much more than three or four inches taller, etc. It therefore seems not just odd but borderline perverse to see a couple that is 19 inches apart — the almost-freakishly-tall New Jersey Nets basketball player Kris Humphries and the under-sized Kim Kardashian — get married. 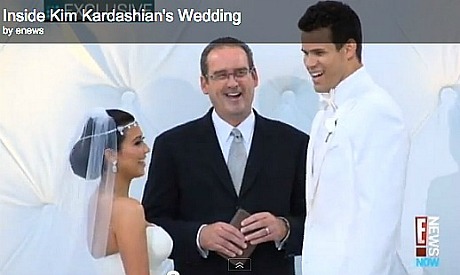 What kind of bizarre pyschologies would lead these two to hook up, much less tie the knot? Proportionately-speaking the 6’9″ Humphries marrying the 5’2″ Kardashian is like a six-foot man hooking up with a woman who’s four-foot-five, or a 5’8″ guy going out with a woman who’s 4’2″. From a size-alone perspective it’s like a moderately tall man having sex with a second- or third-grader. It’s kind of sick. Kardashian’s apparent need for security and submission (i.e., taking comfort from being protected by a guy who’s almost as big as Richard Kiel‘s “Jaws”) needs to be written about by a psychologist who knows more than I do.

If I had my druthers, I would lead a guns-blazing Libyan-styled revolution (metaphorically speaking, of course) against the 21st Century ditzoid female psychology that celebrates the reality-show nothingness of Kim Kardashian.