Rain, Wind…Not That Big A Deal

I’ve known disappointment in my life and I’ve seen what disappointment can do to hardened professionals, but I’ve rarely seen the kind of panicky disappointment that CNN reporters are conveying right now. Suppressed but all the more for that. These people clearly realize that Hurricane Irene is a shortfaller, and is nowhere near the aggressive destructive force that the media has been warning everyone about for the last two days. And they don’t know how to play this.

They’re flopping around like beached flounders, the news anchors are. The “we’re in for some big weather trouble!” current won’t fly any more, and they don’t know whether to panic (“Oh, God…the ratings are going to drop and we might be severely reprimanded if not fired for failing to jack up viewer anxiety levels!”) or breathe a sigh of relief and confess to viewers. “Whew…it’s not gonna be that bad! Wet and windy and loss of power, but nothing too scary.” Update: Hurricane Irene is no longer a hurricane but a candy-assed tropical storm.

All the way from California I can sense that the New York harbor seagulls are generally unimpressed. You can hear them calling out to each other, “It’s okay, guys…caw! caw!…it’s cool! It’s just heavy rain and blustery wind…a storm but nothing to sweat that much.” 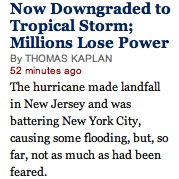