It’s been 16 or 17 years since Gabrielle Anwar “disappeared” from features and moved over to television. The last thing she did that really mattered was that tango dance scene with Al Pacino in Scent of a Woman (’92). I’d very nearly forgotten her. Things fall away and you move on. And then wham…her face (perhaps even more stimulating at 41 than in her early 20s) popped up in a trailer for The Family Tree (Tuckman Media, 8.26). 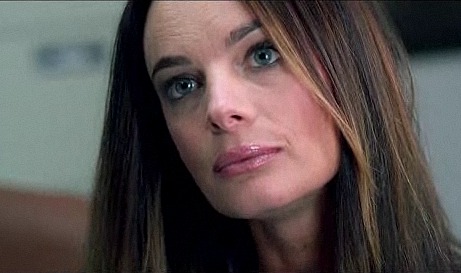 There’s something about faint signs of age settling into the face of a strikingly beautiful woman that gets me. I don’t know why exactly. Even if she has what appear to be trout lips.

The film, an American Beauty-resembling dramedy about a mom with memory loss and a dad with a proverbial wandering eye, is a problem. I haven’t seen it, but the website’s 1996-era design style tells you everything. No, I don’t think Tuckman Media was trying to be hip by intentionally trying to make it look like a Clinton-era website. Anwar’s costars are Dermot Mulroney, Hope Davis, Chi McBride, Vhristina Hendricks, Selma Blair, Keith Carradine, Max Thierot, Rachel Leigh Cook, Jane Seymour and Britt Robertson. The director is Vivi Friedman.