I’m of the opinion that Andy Serkis‘s performance-capture emoting as Ceasar-the-chimp in Rise of the Planet of the Apes is a little too broad and underlined…just a tad. But I have no argument with those who feel Serkis and director Rupert Wyatt have done something truly exceptional here. There’s no question that Serkis’s performance is the emotional lynchpin of the film, and that, in a braver, fairer world, it would be fully justified and appropriate to nominate him for Best Supporting Actor. 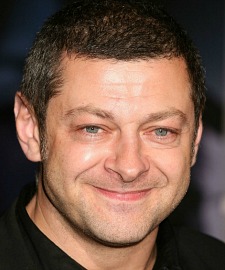 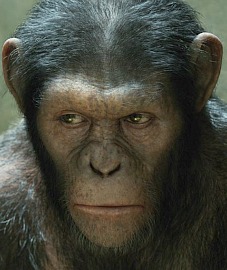 As I said last night, the actors branch of the Academy, notoriously fearful of CG motion-capture acting as an industry trend, will probably try to stifle any such talk. That would be an unjust and discriminatory position to take, of course, but actors have staked out their position on this before, adamantly. So just to be an agitator let’s start the talk here and now — Serkis’s performance is not only striking and memorable but Oscar-worthy. It deserves the recognition of a Best Supporting Actor nomination. Really.

To be fair the talk actually started last night when The Hollywood Reporter‘s Carolyn Giardina broached the subject. While Rise of the Planet of the Apes “is sure to be a major factor in this year’s visual effects Oscar race,” she wrote, “the bigger awards question is whether Andy Serkis, the actor who portrays the ape Caesar, will be considered a contender for an acting nomination.

“That honor eluded him ten years ago when he played the tragic creature Gollum in The Lord of the Rings. That role, however, did launch an ongoing Hollywood debate about how much an actor contributes to CG characters who are created through performance capture.

“WETA Digital, the Wellington, N.Z.-based VFX company behind both Rings and Apes, has always maintained that the actor drives the performance of its CG creations. ‘Performance capture (is) really (designed) to give you the actors’ moment — the spontaneity, the thought, the insight that really comes from an actor who really truly understands his role,’ says WETA’s four-time Oscar winning VFX supervisor Joe Letteri.”

Hitfix‘s Drew McWeeny has written that Rise is “largely driven by yet another groundbreaking performance from Andy Serkis, who is nothing less than the first digital age superstar at this point.

“It is incredibly moving to see just how fully Serkis brings this character to life. When people say they don’t understand why filmmakers or actors are excited by performance capture, it’s because we’re still in the early days of this, and we don’t have many great examples to point at yet of how this really works. You can now use Rise Of The Planet of The Apes as a perfect case study in how an actor can project a soul through a digital character and really bring it to life.

“Caesar is the main character, and we see him grow from a clever but immature chimp in captivity, raised in absolutely optimal human conditions, pampered, loved, into an animal twisted by the worst sort of human behavior, abandoned, angry, ready to run. And Serkis plays it all.”