A portion of last night’s visit to North Hollywood — NoHo — involved a pleasant chat with the co-owner of Phil’s Diner. She suggested that I check out Boomermania, a musical that’s just opened at the Noho Arts Center. Unless the designers of the ads are hiding their cards, it’s clearly a nostalgia show. I half-smiled and shrugged my shoulders and told her that it’s an odd time in our country’s history for someone to put on a bouncy, good-time show that celebrates the most reviled generation in American history. 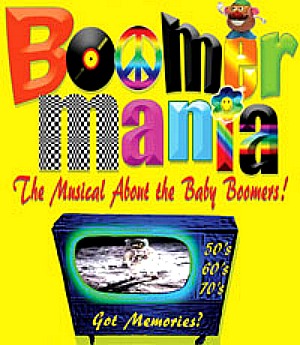 Boomers started out as ’60s rebels ands spiritual pathfinders (or the best of them did, at least) but they evolved into the most selfish and spoiled and economically destructive generation of all. We all know that America is on a downswirl, and that boomers have led the way. The economic meltdown of ’08 was mainly boomer-driven. Boomers will be the last generation to lead hugely swanky and abundantly materialistic lives in this country’s history, because from here on the levels of comfort and abundance and opportunity and assurance are on the wane, and everyone knows this. It’s a crushing realization for each and every American out there. Boomers have ruined it for GenXers and GenYers. They are absolutely the reigning Bad Guys of the 21st Century.

A lot of boomers are okay and many are good or admirable or even great in their visions, actions, creations, passions. Making an argument with too broad a brush always sounds silly. But this is real and everyone knows it. The boomer go-alongers (the ones who weren’t in the vanguard of social change as kids, and even some of those who were but got corrupted and corroded) have a reputation for selfishness and self-absorption that is gold-plated and will live in infamy. They really screwed things up for a lot of people. Any GenXer or GenYer who hates them has my sympathy.