A couple of nights ago I popped in a Bluray of Get Shorty (’95). For old times’ sake or whatever. Sixteen years ago and it feels like…I don’t know, six or seven years ago. And it hit me as I watched that most of the people who costarred in this thing are kind of done now, and they were so hot and kicking and on their game back then, or so it seemed. Savor the moment because it doesn’t last long. 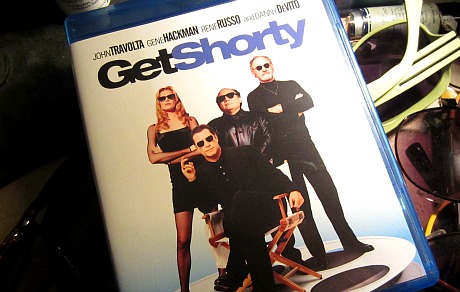 The only two cast members who are still happening are John Travolta and James Gandolfini. And you could argue that Gandolfini’s career is more vital and/or necessary than Travolta’s these days, especially considering reports about Travolta intending to costar with Sylvester Stallone in Expendables 2. There’s no way Gandolfini would even flirt with a film like that.

Rene Russo fell off the map about five or six years ago (her last big score was ’99’s The Thomas Crown Affair), although she played Odin’s wife in Thor. Gene Hackman has retired. Danny DeVito used to be “Danny DeVito” — now he’s “Danny DeVito on TV.” I think most of us suspected he was over theatrically when he costarred with Parker Posey in The Oh in Ohio (’06). The last time I took notice of Delroy Lindo was when he was in Domino six years ago. Bette Midler has her musical career but movie-wise she pretty much stopped mattering after The First Wives Club (’96), and her last role of any consequence was the titular character in Drowning Mona (’00). David Paymer…what’s he doing?

I’m not faulting any of these people, mind. They’re fine talents, etc. I’ve enjoyed their best performances as much as the next guy or gal. I’m just saying “it sure gets away from you.” Your life and career can feel right and high-throttle and the sky’s the limit, and then you turn around and it all turns to ether.

But I am sure am glad that Barry Sonnenfeld is no longer a directorial force to be reckoned with.