The death of former Watergate bagman Kenneth H. Dahlberg, 94, was reported today, although he died four days ago. It’s not fair that Dahlberg, an ace dogfighter and a P.O.W. camp escapee in World War II and a successful businessman for most of his life, is primarily known as the guy who was busted for Watergate money shenanigans by Washington Post reporters Bob Woodward and Carl Bernstein. But that’s how it is.

I feel I know Dahlberg as well as I know Harry Lime or Alec Leamas or any other ethically murky character in an adult thriller. Because I’ve watched that five-minute scene in All The President’s Men when Robert Redford‘s Woodward calls Dahlberg, a fund-raiser for Nixon’s re-election campaign, and asks why his name is on a $25,000 cashier’s check that had been deposited in the bank account of Bernard L. Barker, one of the Watergate burglars.

The Woodward-Barker scene starts at the three-minute mark.

I saw this Sean Young-talking-to-David Letterman clip last night on David Poland‘s Hot Blog. I’ve always liked Young’s brass or sass or whatever but reaching out to the “big boys”? Doesn’t she look a little too 40ish and mommy-ish (i.e., heavy) to rouse the imagination of that crowd? I think she needs to reach out to the “small boys” and see what happens. At least she’s being honest.

As much as I admire and respect Michael Fassbender‘s sex-addict performance in Shame, I don’t think he has a chance in hell of getting any Best Actor action from it. He’s playing an ice man who’s too remote, too indecipherable. Ditto his performance as Carl Jung in A Dangerous Method. The 2011 Fassbender performance that got to me the most? That I found emotionally whole and affecting and quite supple? His performance as Rochester in Cary Fukanaga‘s Jane Eyre. But no one’s paying attention to that one so I suppose that means “game over” for the guy. Or does it?

The central dramatic element in The Swell Season, a nicely captured black-and-white doc about how Glen Hansard and Marketa Irglova coped with the success of Once, is, of course, the breakup of their romantic relationship. And the big torpedo, boiled down, is Irglova’s inability to deal with the hooplah, which is due to her being too young.

This is almost completely typical. Whenever an under-25 performer suddenly hits it big, they tend to withdraw from the resulting attention, and then rebel against it in this or that way. Leonardo DiCaprio seemed to more or less freak out in the wake of Titanic‘s success, and didn’t really ease back into things until two or three years later. So the 20 year-old Irglova being unable to roll with being a sudden “star” fits right into this.

Hansard, on the other hand, is totally cool with backstage admirers, and gradually starts shaking his head at Irglova’s hissy fits. And you can see where it’s all heading.

So what the film boils down to is a portrait of a once-beautiful relationship (as depicted in Once, at least) that was probably doomed to start because of age disparity. Hansard is now 41; Irglova was 19 when Once was made, and 20 when the big success happened. They were toast as of 2009. Irglova got married last June to Tim Iseler, a studio engineer.

Otherwise the doc, co-directed by Nick August-Perna, Chris Dapkins and Carlo Mirabella-Davis, is an engrossing portrait of the musical performing world, and is very nicely captured in black-and-white.

The narration’s boastful tone towards the end of this trailer for Barry Avrich ‘s Unauthorized: The Harvey Weinstein Project has me concerned. There’s a great documentary to be made about Weinstein, whom I’ve always seen as a scrappy East Coast mogul in the tradition of The Bad and the Beautiful‘s Jonathan Shields (as played by Kirk Douglas). A little voice is telling me that Avrich’s film, which opened online yesterday via Sundancenow, might not be it.

Has anyone seen it? I’ll try to catch it sometime this weekend.

Bullfighter Juan Jose Padilla was badly gored in the face last night by a bull named Marques. To which I say “tough tits.” I have no sympathy at all for a costumed sadist who gets hurt while acting out a ritual in which a poor dumb animal is ritualistically taunted and then speared to death for the delight of spectators. The altercation happened in a bullfight that was part of the annual Virgen del Pilar festivities in Zaragoza, Spain. 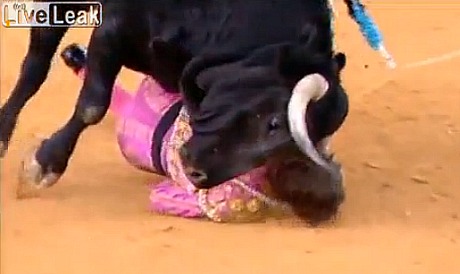 A journalist friend said something yesterday that’s stayed with me. We both agreed that in a perfect world Olivia Colman‘s performance in Tyrannosaur would easily place her among the very top contenders for the Best Actress Oscar. But she hasn’t got a chance, my friend said, because Strand Releasing, Tyrannosaur‘s U.S. distributor, apparently has no mad money to spend on her campaign. And without ample funds there can’t be any kind of press tour, trade ads, special industry screenings and food-and-drink events in Los Angeles and New York.

So this is the reality then. Your motion-picture performance might be devasating…it might soar higher or reach deeper than any other seen in any category in a given year, but if you can’t come up with serious cash and fly Virgin and belly up to the bar and do interviews in a plush Manhattan midtown or Beverly Hills hotel and throw parties that Academy members can attend or at least luncheons for elite New York and L.A. journos then your performance, no matter how great or staggering, might as well have been given in a closet. Because “they” won’t take notice if you don’t. And that stinks. That really stinks.

Maybe it’s wiser to urge support for Colman as a Best Supporting Actress contender. That could easily be finessed as her role as an abused wife in Tyrannosaur isn’t an absolute lead. The lesson of Another Year‘s Lesley Manville, which I presume I don’t have to explain, should be kept in mind.

Congratulations offered to DreamWorks/Disney, Hugh Jackman, Angry Films’ Don Murphy and Real Steel for more than doubling the weekend tally of George Clooney‘s The Ides of March (even though the latter is in 2199 theatres compared to Steel‘s 3440) and taking the weekend’s top slot with a projected $27 million.

Ides, far and away the better film, will end up at #2 with something like $11 million. I don’t want to know about the third-place Dolphin Tale, which will end up doing around $8.5 million by Sunday night for a $48 million tally. And it’s the third weekend for the fourth-place Moneyball, hangin’ in there with a projected/estimated $7 million or thereabouts and a cume of $48.7 million. (Figures from Deadline.)

I don’t recall a single moment in any of the three Danish-made Girl movies in which Noomi Rapace conveyed this level of vulnerabiity. And I don’t know if this kind of emotionality is in Rooney Mara‘s performance in David Fincher‘s The Girl With The Dragon Tattoo either. The pic was shot by Jean-Baptiste Mondino for Le Monde. 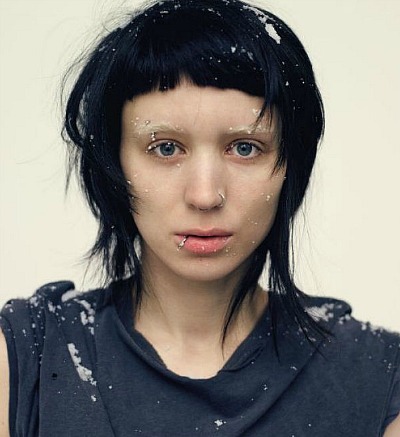 What’s that white-gray stuff on her face and hair? Volcanic ash?