Amidst a tsunami of Venice Film Festival pans of Madonna‘s W.E., some overlooked that fact that the Daily Mail‘s Baz Bamigboye wrote a rave. “It’s going prove divisive,” he admitted. “A lot of people will loathe it, simply because it’s been made by Madonna. But if they were to watch it with no knowledge of who directed, they would be pleasantly surprised.

“They might even find much of it enjoyable, although the odd moment may have them wondering if Madge has committed treason.

“It also happens to be one of the best-dressed movies of the year. The costumes, as you would expect from the original material girl, are eye-popping. In fact, the whole thing looks fantastic — it’s designer Viagra.”

N.Y. Times sports writer Jonathan Mahler has hit on something in a 10.14 piece called “It’s All Moneyball Now.” The piece isn’t entirely about the political echoes in the film, but it nails something I’ve been kicking around for about a month now.

“Thanks partly to the cultural phenomenon of Moneyball, which demonstrated that teams didn’t need a big payroll to win, we’re all small-market fans now, no longer rooting for the hapless underdog — sorry, Mets and Cubs — but for the team that is doing more with less.

“It’s a subtle but significant distinction and it has unmistakable political overtones, especially during this time of rising class resentment. You didn’t have to spend the day dancing around the drum circle in Zuccotti Park to see Game 5 of the Yankees-Tigers division series in New York — with its constant cutaways to those slick-suited men hunched over their BlackBerrys in the Legends Suites — as more than just a baseball game.

11 Comments
Who Are You?

The difference between Hollywood Elsewhere and other sites is that HE will occasionally…uhm, make that very occasionally run ads for reasons that are somewhat questionable from a business perspective. Not within the hardcore Academy season (late October through February), of course, but once in a blue moon in the spring or summer or early fall I’ll do what I can for a film I like. Because sometimes (i.e., when a film is really exceptional) it feels better to show aesthetic allegiance and/or spiritual support than to run things strictly by the Gordon Gekko handbook. Call me irresponsible but every now and then a site like mine needs to walk the walk. 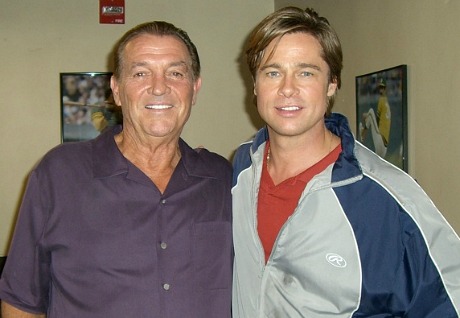 I drove up to Montecito last night to attend a swanky, splashy, champagne-fizzy tribute-fundraiser for Michael Douglas, organized and staged by the Santa Barbara Film Festival and honcho Roger Durling. It was a Douglas family event. The trophy is called the 2011 KIRK DOUGLAS AWARD FOR EXCELLENCE IN FILM, and 94 year-old Kirk Douglas was there, of course. As was Michael’s wife Catherine Zeta-Jones, old pally and creative partner Danny DeVito and Michael’s American President costar Annette Bening.

For a guy who was grappling with serious throat cancer and a hovering gray cloud a year ago, Douglas looked like $10 million bucks last night. Trim, handsome, vigorous, sharp as a tack. And locked in to play Liberace next year for director Steven Soderbergh and HBO Films with Matt Damon as Liberace’s live-in lover.

It happened at the Four Seasons Biltmore, or more specifically at a Biltmore annex with a beautiful open-air terrace that overlooks the Pacific. The sea smelled wonderfully alive and briney, and great amounts of Moet et Chandon champagne were savored by one and all. A nice buzz-on as the amber rosey sun melted into the surf.

Dennis Miller was there, but not in a press-quote mood. I went up to the conservative-minded comedian and former talk-show host to ask what he thought of the various Occupy protests, and Miller — there’s no other way to describe it — did a 180 and just about ran away, saying something about needing to get a drink. I saw him later on and explained what I was on about, and Miller said “I don’t know anything about that” or words to that effect.

As I began the drive I tweeted that I was looking at “an hour’s worth of hell” on the 101 north. A half-hour later that message was re-tweeted by “Old Man Kirk,” which seemed like a cool name and might have been a legitimate Twitter handle of Kirk Douglas. But when I asked Mr. Dougas at the dinner if he was in fact tweeting, he didn’t seem to know what I was talking about. Maybe I wasn’t explaining myself clearly. His wife Anne didn’t know either so “Old Man Kirk” is a friend or an assistant or a dedicated impostor. 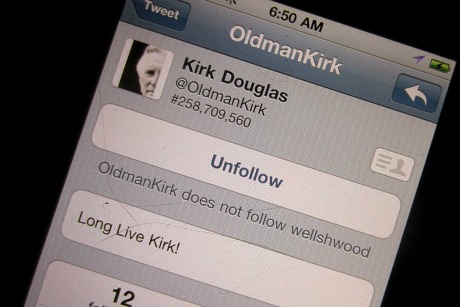 In Contention‘s Kris Tapley and I were hanging together during the pre-dinner cocktail hour. The event was black-tie, and Kris asked me why I wasn’t wearing a black tie (which I’d brought with me) with my nice black suit. I can’t wear a tie, I said. It ties me up & ties me down. It does something to my soul.

A Wiki-linked description of Michael Douglas’s roles by film critic and essayist David Thomson reads as follows: “Douglas was capable of playing characters who were ‘weak, culpable, morally indolent, compromised, and greedy for illicit sensation without losing that basic probity or potential for ethical character that we require of a hero.’

Critic and author Rob Edelman has noted that in many of his roles Michael Douglas “personified the ‘contemporary, Caucasian middle-to-upper-class American male who finds himself the brunt of female anger because of real or imagined sexual slights…an everyman who must contend with, and be victimized by, these women and their raging, psychotic sexuality.” These themes of male victimization are found in Fatal Attraction, War of the Roses, Basic Instinct, Falling Down and Disclosure.

My first meeting with Kirk Douglas happened during a press-get-together at Elaine’s restauant in 1982. I later visited him on the set of Eddie Macon’s Run in Laredo, Texas, and we got on famously. I knew all his films and roles and many of his most famous lines. “You’ve really done your homework!”, he said.

Douglas was so charmed or flattered or whatever that he gave me a lift back to Houston on his private jet. I met him at a Hollywood gathering 18 months later (sometime in late ’83) and he didn’t seem to recognize me.

I was going to flop in a Carpinteria motel but decided at the last minute to drive all the way back to West Hollywood, and I did. 100 minutes door to door, not counting a gas stop. 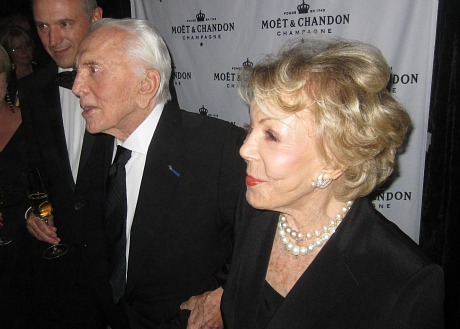 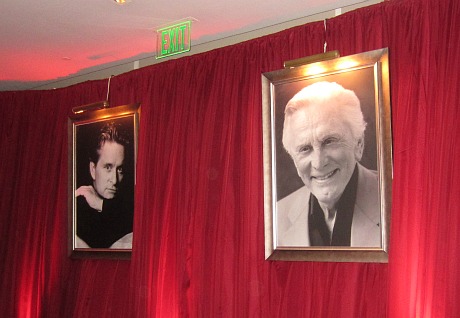