Perhaps the biggest Bluray blunder since last May’s Barry Lyndon aspect-ratio debacle has been discussed and lamented by members of Home Theatre Forum over the last couple of days. It concerns the just-released British Bluray of West Side Story (which is presumed to be a duplicate of the forthcoming domestic Fox Home Video version). The complaint is about a crazy and nonsensical fade-to-black that happens toward the end of the overture sequence.

Doofuses might argue that it’s a relatively minor boo-boo in the greater scheme, but it’s one hell of a mistake in the eyes of film buffs, the Movie Godz and anyone who cares about representing the intentions of the filmmakers. I ordered the British West Side Story Bluray immediately when I heard about this to see if it’s true. If it is, this snafu may be cause for a recall and re-mastering, at least as far as the domestic version is concerned.

To hear it from HTF member Adrian Turner, it sounds like a monkey was at the control board when the Bluray was scanned. Fox Home Video will release the West Side Story Bluray domestically on 11.15, but they allegedly had nothing to do with transferring the elements to Bluray, or so I’ve been told.

Turner wrote early this morning that he “was so worried about this tampering with the overture that when my copy arrived ten minutes ago I played the disc immediately, and I’m afraid it’s true. There is a complete fade-to-black [during the overture] just before the pull-out to reveal the main title.

“The overture plays from the start as it should do and the Bluray image is very sharp. At the climax of the overture, the moment when the music changes tempo and the color should switch to blue and the zoom-out, there is a quick fade to black and then we get the final section of the music and the blue image. This image is very fuzzy indeed and then it clears and becomes sharp with the zoom-out to reveal the title WEST SIDE STORY. The dissolve from the Saul Bass design to the live shot of New York is just as it should be.

“I don’t know why [the parties responsible] have chosen to alter the film and have ruined this most dramatic moment. It’s a total travesty and I don’t care what the rest of the Bluray looks and sounds like. I think we have a sort of Gladiator moment here. Fox need to withdraw this disc and re-do it.”

HTF member A. Hollis of New Orleans asks, “What is with all the tampering? The Bluray should be the mother of all answers. [The fault] has to lie with people in charge who knew nothing about what they were working on. Whoever transferred this must have thought it was a typical overture sequence that needed to fade to black before the film begins, but the entire segment needs to be seen unbroken for impact. Damn, they are just so uninformed!”

Question: A couple of days ago DVD Beaver‘s Gary W. Tooze posted a sneak preview of the British West Side Story Bluray. It wasn’t a “review” but you’d think he’d at least mention something as glaring as this…no? He didn’t. 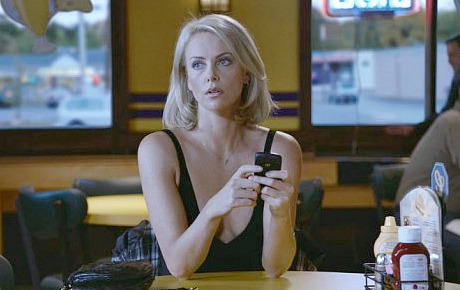 “Reitman and screenwriter Diablo Cody‘s new collaboration shares some stylistic notes with Juno — a pop-saturated soundtrack, a woman-child stuck between adolescence and adulthood, a droll appreciation of daily life in suburbia.

“It’s also a step in a new direction, both for the creative team and for movies, a mature and humane comedy centered on a misanthropic female antihero.

“Think of it as Juno‘s wicked stepsister.

“Charlize Theron plays Mavis Gary, a divorced writer (or, as she prefers it, ‘author’) of ‘Sweet Valley High’-style teen novels. Though she’s in her 30s, she’s still obsessed with her former high school sweetheart, Buddy Slade (Patrick Wilson), who is married and is a new dad. Mavis returns to her hometown to reclaim her man, oblivious to the fact that he is happy with his life. A comedy of real awkwardness ensues.”

Is ESPN/Grantland‘s Bill Simmons ever going to review this thing? Did he ever say anything at all about Moneyball? I thought he was going to weigh in on movies from time to time and expand his range beyond sports. He’s starting to disappoint me.

Now that some HE regulars have seen Sean Durkin‘s Martha Marcy May Marlene, I’d like to know what the shakeout is. No more bearded-hipster film festival cruise-throughs — the time for facing Joe Popcorn is nigh.

Three days ago I projected that “the word-of-mouth will be very positive, I expect, and it’ll be necessary for everyone to carefully inspect Elizabeth Olsen, younger sister of the Loathsome Twins.

“But an unsettled feeling is also going to kick in when Joe and Jane Popcorn sit down with this film. The smooth asphalt road of the last nine and a half months is going to become a little muddy and bumpy once they watch that ending.

“All the things that are eerily good about Martha Marcy May Marlene are still going to be there in front of paying audiences. Joe and Jane Schmoe are going to feel chilled and entranced by the last few minutes, but — this is an important ‘but’ — they’ll also be having a problem with it, or so I suspect.

“And they may, like me, feel a little frustrated with Olsen’s Martha character, specifically her inability to do or say anything that might somehow alter or transform her situation.”

For years Tyler Perry has done a fairly good job of proving his mediocrity as a director and playwright. Lionsgate managed to sell the notion that he might be upping his game with For Colored Girls, but the proof was in the pudding. Now he’s managed to lower his rep further by casting the loathsome Kim Kardashian in a supporting role in The Marriage Counselor, his latest feature. Simply for the value of her worthless celebrity allure among vapid under-25 females (sex tape, already-over marriage to seven-foot-tall Lurch, product-endorsement deals, etc.).