I was so underwhelmed by David Frankel‘s The BigYear (20th Century Fox, now playing) that I forgot to review it. Howard Franklin‘s script about three bird-watching devotees (Steve Martin, Owen Wilson, Jack Black) tries to create an interest in who will catch sight of (or take pictures of, or simply hear) the most birds in a given year. But bird-watching tallies require no proof so anyone can fake a sighting or two. It’s an honor-system competition so who could care? How could such a passive pastime possibly be seen as a “race”? 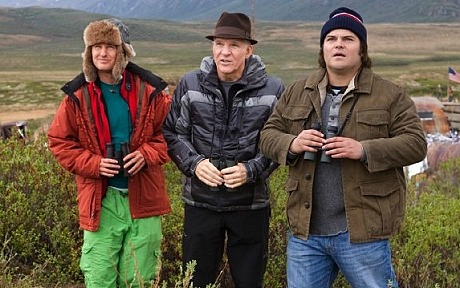 I hated Frankel’s attempts to inject all kinds of artificial punch-up action. (To think that the director of The Devil Wears Prada might have actually directed Moneyball!). And watching Martin, Wilson and Black doing what they can to keep the energy levels up is like watching three hamsters running inside those cylindrical cages. I didn’t give a damn about any of it.

The general public didn’t either, to go by Deadline‘s Saturday morning report. It shows that The Big Year has come in eighth place with an estimated $3 million weekend haul. It cost $41 million to make before Canadian tax credits, according to a 10.13 “Company Town” article.