A failing aspect-ratio grade is hereby given to Sony Home Video’s new Bluray of The Caine Mutiny, and particularly to Sony’s restoration guy Grover Crisp for approving a 1.85 masking of a film that was absolutely intended to be seen in a 1.33 or 1.66 to 1 aspect ratio. 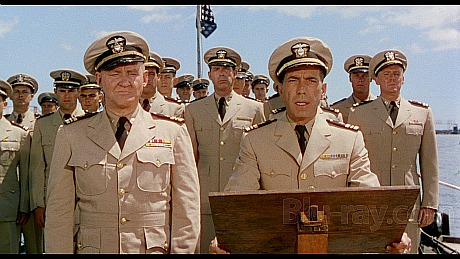 Image from the recently released Bluray of Edward Dmytryk‘s The Caine Mutiny. 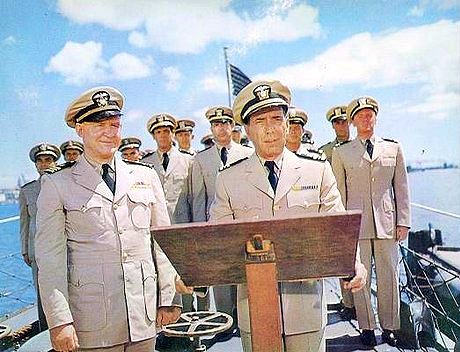 Same scene (although perhaps not same shot) with boxier cropping. What do we gain as viewers from not seeing a bit more sky, and a fuller view of the lecturn that Humphrey Bogart is standing behind?

Wider aperture plates were only just being introduced to theatres in 1953 and ’54 with The Robe, the very first CinemaScope film, debuting in ’53 and the need to simulate widescreen images relatively new. The Caine Mutiny was released on 6.24.54, and there’s no way in the world that Caine dp Franz Planer expected viewers to see this film within a 1.85 frame. Okay, maybe some stickler exhibitors in New York and Los Angeles might have projected it with 1.85 aperture plates, but Planer knew that most of the country would be looking at a boxier version. And Crisp knows that.

George Stevens‘ Shane was also shot in 1.33 and released only about 15 months before The Caine Mutiny, and you can bet no one at Paramount Home Video ever considered putting that classic on DVD with a 1.85 or 1.66 to 1 aspect ratio. Not a chance. You can bet that the people mastering the Gaumont Bluray of Jules Dassin‘s Rififi, which had its European debut in 1954, never dreamt of masking it off at 1.85.

Loyal Griggs‘ Shane cinematography won an Oscar, and I recall Pauline Kael writing that it was thought to be some kind of sick joke that the tops and bottoms of his images had been severed with a fake panoramic cropping of 1.66 to 1 when Shane played at the Radio City Music Hall.

The 1.85 Caine Mutiny Bluray is following the lead of the two or three DVD versions that came out between ’98 and ’07. The VHS and laser disc versions of The Caine Mutiny presented the film at a full 1.33 to 1 aspect ratio, which made it look very handsome indeed. But you know the old story. People want their 16 x 9 high-def screens to be completely filled when they watch their Blurays so the tops and bottoms were chopped off and to hell with what Planer and director Edward Dmytryk wanted people to see.