Six and a half months ago I saw Chris Weitz‘s A Better LIfe, and I wrote right away that Demian Bichir‘s authentic, quietly moving performance as a Mexican “illegal” tree-trimmer in a tough spot due to the theft of a recently purchased pickup truck was award-worthy. I’m still saying that despite the odds, and Bichir is still the quiet-man contender with his feet planted and all that. Yeah, he’s been pushed aside by the fall contenders (which always happens) but he still delivered like a champ when he had his shot. 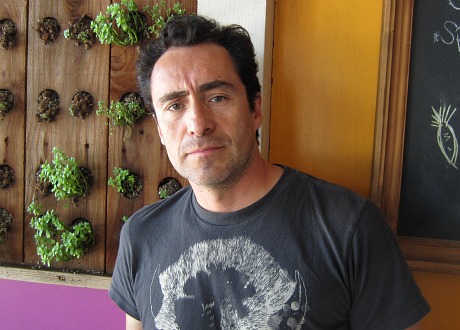 Demian Bichir at Le Pain Quotidien a week and a half ago.

I’m saying this in part because i’m about to attend a launch party for the Better Life DVD at the Four Seasons, and I want to look Bichir in the eye and tell him I’ve reaffirmed my respect and support for his performance. Because it’s the right thing to do.

A Better Life is “clearly one of the truest and sturdiest films I’ve seen so far this year,” I wrote last June. “It may turn out to be more of a Spirit Awards winner than an Oscar contender but let’s see where it goes.”

“Delicacy, precision, startling force,” the N.Y. Times‘ Alex Kuczynski wrote two months ago. “These are qualities that defined Bichir’s performance in A Better Life, a remarkable film that has cemented his reputation as a formidable talent in Hollywood.

“While the movie is political, certainly, Weitz (director of About a Boy, The Golden Compass and The Twilight Saga: New Moon) chose to tell the story of Carlos Galindo as a piece of social realism, rather than as political propaganda. However, as Weitz told me, ‘the moment you train a camera on someone, especially a film camera, you say they are worthy of being paid attention to, and it elicits sympathy. In that regard, the film is political by default.’

“But he chose not to push that button too hard and risk ‘turning Carlos into a symbol rather than a closely observed character,’ he said. In that sense, A Better Life is a story about the delicate relationship between a father and son, about loss of culture, about isolation, about the spiritual lives of two nations.”