Clint Eastwood is a signature filmmaker, an auteurist. His movies have a tone, a vibe and a stamp that say “take it or leave it, but this is a Clint film.” They’ve all delivered a feeling of wholeness and completion, certainly by Eastwood standards. The problem for some (many?) of us is that post-Million Dollar Baby and with the exception of Gran Torino his films have begun to feel a little too meditative, longish, labored and languid. And what’s with the frequently desaturated color?

Letters From Iwo Jima was eloquent and affecting, but Flags of Our Fathers was a slog, The Changeling became the basis for a drinking game, and Invictus and Hereafter were shortfallers. And now comes J. Edgar, which I saw last night.

It’s an Eastwood film, all right. And it’s not bad for what it is. No, better than not bad. “Decent” is a fair term to use. It’s Clint’s version of Brokeback Mountain, in a sense, and is finely performed and professionally assembled, etc. Dustin Lance Black‘s script certainly covers the bases, and J. Edgar is actually a fairly radical film for a guy of Eastwood’s age and history and conservative philosophy. If J. Edgar Hoover is still floating or swirling around on some ectoplasmic level and he has a chance to see Eastwood’s film when it opens, he’s going to be one pissed-off ghost.

But for all the things it does right and despite that feeling of rock-bottom assurance that an Eastwood film always provides, J. Edgar is a moderately boring film, at times in an almost punishing way.

Mostly because it’s a profound drag to spend time with such a sad, clenched and closeted tight-ass. Hoover, the founder and ruler of the FBI for 37 years, was such a guarded and snarly little shit, and truly reprehensible in his attitude toward and relations with Martin Luther King, and a coward to boot. And when you mesh this guy with that languid highly relaxed Eastwood pacing and that desaturated color scheme (again!) the film begins to feel like it’s slowly draining the life out of you. It desaturates your soul. 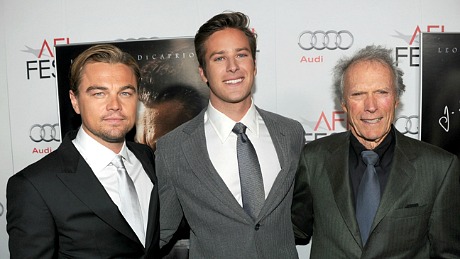 And after a half-hour or so I began to say to myself, “This isn’t a bad film…better than I thought it would be…Clint knows what he’s doing…and it’s true about Leonardo DiCaprio‘s performance being highly focused and exacting and possibly award-worthy (maybe), but…let’s see, 136 minutes long, another 100 to go…I have to be honest and admit that I’m not looking forward to sitting through the rest of this. Although I don’t want to miss Armie Hammer‘s big emotional blowout scene (i.e, seeing red after Leo mentions the possibility of his marrying Dorothy Lamour and then wrestling with him on the floor and kissing him) or the moment when a distraught Leo puts on his mother’s dress and pearls after she dies.”

J. Edgar is an earnestly conceived and well-made film, and one that delivers the goods by the end (i.e., making the case that Hoover’s life was all about acquiring and keeping power, and that this power was used for dubious motives in many instances, and that the man himself was a tragic if not a pathetic figure). But it’s a bit of an endurance test, and the under-40s, I suspect, are going to stay away in droves.

The old-age makeup looks like old-age makeup, but for whatever reason I got used to Leo’s old-Hoover appearance, and it wasn’t that much of a problem. But I couldn’t figure what his Hoover accent was about. I only know that I kept saying to myself, “He sounds like an actor using a strange accent.” And Hammer’s old-Tolson seems a bit too leathery and liver-spotted, like some ghostly figure out of a Roger Corman film. Judi Dench‘s performance as Ma Hoover and Naomi Watts‘ as Helen Gandy, the FBI director’s longtime secretary, are steady and true.