Tonight’s screening of Lasse Hallstrom‘s Salmon Fishing in the Yemen at the Palm Springs Int’l Film Festival didn’t work out. I left at the one-hour mark, but it wasn’t the film’s fault. It was mine, or rather the fault of the circumstances. 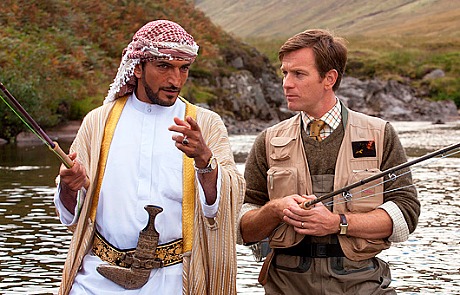 One, the drive from L.A. to Palm Springs took three hours rather than the usual two, and two of those hours were stop-and-go hell. So I was stressed and frazzled. Two, the sound in the Palm Springs High School auditorium echoed and bounced all over the fucking place, forcing me to to cup my ears to hear even half of the dialogue. There were whole scenes I was missing. And three, there were a couple of 20something girls sitting to my right who were constantly talking to each other. Not whispering — talking. I was so whipped I didn’t even admonish them.

So the hell with it. They won. The shitty sound and the girls and the fatigue, I mean.

The portion that I saw told me that Yemen is an lightly engaging, smartly written adult comedy with a dry, underplayed sense of humor — a bit like Local Hero. I’ll see it again sometime soon, and probably have a fine time with it.