I grew up in a suburban neighborhood in which cats used to roam around. Ever since I’ve had this idea that cats should be allowed outside if the immediate environment is at least somewhat safe — no fast cars, relative peace and quiet, nice homes with lawns, trees and bushes, squirrels scampering up trees, etc. Which is why I decided after moving back to West Hollywood last February that Mouse, my three-year-old Siamese, should be let out in the evenings. My other feline, a white munchkin named Aura, is afraid of the outdoors, but Mouse wants to feel the air and look up at the stars and sky. And I can’t abide the thought of keeping him inside. 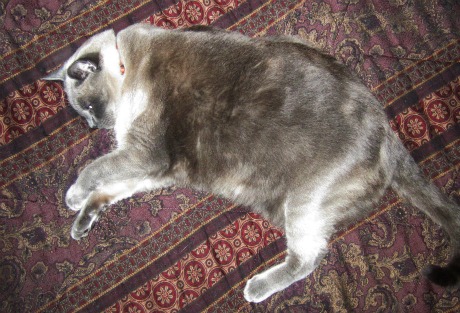 I realize this means he might one day get hit by a car, God forbid, but Siamese cats are more intelligent than other breeds (or so I’ve always sensed) and I think there’s a 97% chance that he’ll be okay. No, I don’t like living with that 3%, but the alternative — i.e., in effect sentencing Mouse to a life of indoor imprisonment for the rest of his days — is something I just can’t do. Every now and then a neighbor will run into Mouse, read his name plate and call and ask “excuse me but do you know your cat is out?” They’re concerned. Cats are generally kept inside as a rule. Last summer a pretty lady called to say that Mouse had been hanging in her two-bedroom apartment across the street and did I want to come pick him up? Another time a woman called furious that I could be thoughtless enough to expose an animal to possible harm — i.e., “what is wrong with you?”

I obviously got what she was saying but she hadn’t considered the imprisonment thing, so we’re even.