Longtime Village Voice film critic Jim Hoberman has been cut loose. Hoberman had been a Voice critic since 1983 1978, a staffer since ’83 and the paper’s senior critic since ’88. The news was initially posted at 5:37 pm eastern, and then New York/”Daily Intel”‘s Joe Coscarelli posted it at 6:08 pm. This makes Karina Longworth the only noteworthy V.V./L.A. Weekly film critic left on the payroll. 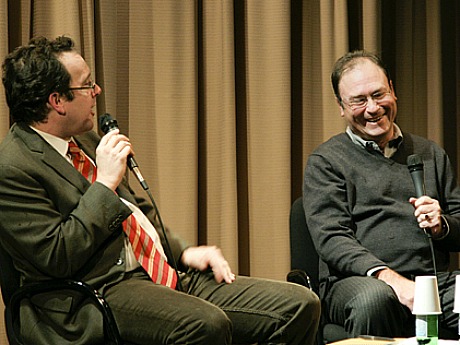 “To celebrate his 30th anniversary as a film critic at The Village Voice, on 1.5.08 the Museum of the Moving Image presented a conversation with Hoberman moderated by New York Times film critic A. O. Scott.”

“I’ve seen a lot of people lose their jobs there in the last five years,” Hoberman told Coscarelli. “I would be disingenuous to say I hadn’t considered the possibility that this would happen to me eventually. I was shocked, but not surprised.”

Here’s an mp3 of a chat between Hoberman and N.Y. Times critic A.O. Scott during a Hoberman tribute at the Museum of the Moving Image on 1.5.08.

Here’s a blunt, fair-minded bemoaning of the post-Hoberman situation by Indiewire‘s Anthony Kaufman.

The correct spelling of the Hogan’s Heroes thing: “Hoohhhhberman!”

And here are nine memorable Hoberman quotes from Some Came Running‘s Glenn Kenny. Can I be honest in a Lee Marvin sort of way? The only Hoberman riff on this list that I fully agree with (and enjoy) is the one about Blue Velvet. The florid praise by way of ecstatic description of the wilder portions of Inglorious Basterds seems excessively geeky and cul-de-sacky. I know what Inglorious Basterds is. I sat through that fucker twice, and I don’t think I could stand it a third time. You can’t fool me or push me around. Those days are over.

High Noon forever! And Rio Bravo…well, it’s pretty good here and there. Especially the silent part with grubby Dean Martin and the coin and the spittoon and that look of total disgust on the Duke’s face. But why the hell does Martin knock him cold with a piece of wood? 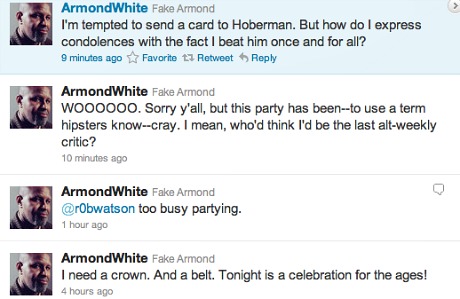