Kasdan Needs To Up Game

I’m leaving Park City today and arriving late this evening at the Santa Barbara Film Festival, which kicked off last night. The opener was Lawrence Kasdan‘s Darling Companion (Sony Classics, 4.20), a lost dog movie which is very, very slight. Variety‘s Lael Lowenstein said it “won’t be long before this one turns up at the Netflix pound.”

It’s basically about an older, well-to-do Denver couple (Kevin Kline, Diane Keaton) getting in touch with their issues through a relationship with a mixed collie they’ve adopted after Keaton and her daughter (Elisabeth Moss) find him huddling on the side of a road. The dog is soon being attended to by a friendly vet (Jay Ali), enjoying a nice hot bath, and given the name of Freeway.

During a Rocky Mountain vacation Kline, an emotionally curt surgeon who’s constantly phoning and texting, lets Freeway slip the leash…gone. Keaton, emotionally invested in her relationship with Freeway in lieu of a dry and distant one with Kline, is hugely pissed and is soon leading a major log-cabin campaign to find the dog. Helping out are Kline’s sister (Dianne Wiest), her easygoing boyfriend (Richard Jenkins), Penny’s doctor son (Mark Duplass) and a sexy exotic European (Ayelet Zurer) who has gypsy-like, extra-sensory insight into Freeway’s whereabouts. And a local sheriff (Sam Shepard) is aware of the hunt and peripherally involved.

I thought maybe Kasdan might be up to something clever here. Perhaps using the lost-dog plot as a way into a kind of Big Chill flick about four or five old farts hanging around a Rocky Mountain cabin and evaluating their lives and times…something like that. But for the most part, Darling Companion is just about finding the dog. Okay, Kline comes around to admitting that he’s too aloof and work-oriented, but this is hardly the stuff of keen audience engagement.

A septugenarian Big Chill would make sense as Kasdan isn’t concerned in the least with Freeway’s whereabouts or adventures. All we do is hang out with the oldsters and Duplass and Zurer and blah blah, and then the story comes to a nice wholesome conclusion.

At one point Kline and Jenkins encounter a kind of Unabomber guy living in a rundown cabin in the woods, and there’s an implication that Freeway might have been kidnapped and/or is being held by this dog of a human being, but this possibility is quickly discarded.

Why does Freeway run away from Kline in the first place? Dogs don’t just run away from their masters. Are we to suppose that Freeway is just as put off by Kline’s selfish cell-phone existence and can’t wait to escape his company? That’s a stretch.

Darling Companion made me feel really old on top of everything else. I’ve known Kline, Keaton, Weist and Shepard since the late ’70s and early ’80s, and they’re all looking and especially acting like people in their late 60s and early 70s with their aching joints and arms falling out of their sockets and their gray hair and Shepard’s teeth looking small and gnarly with his pot belly hanging out…Jesus! Shepard was a smooth romantic figure in the ’80s. 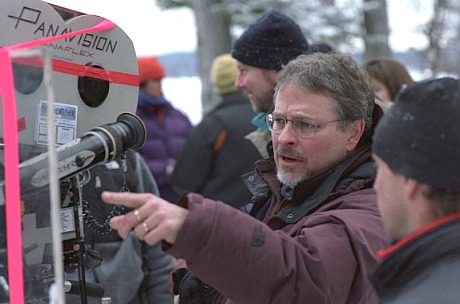 If you’re going to be an older working actor, you have to look younger than you are. That’s the rule. If you’re 75, you have to look 60 or 65 after you’ve just had a facial and been worked on by a skilled hair colorist (i.e., a little gray around the edges). If you’re 60 or 65, you have to look like a 50 or 55 year-old physical trainer. No limping, no paunch, in good shape, no complaining about aching joints. Because I’m telling you it’s really depressing to watch Kline and Keaton stumbling along a mountain trail like refugees from a retirement community.

And yet the film’s best scene happens on that same mountain trail when Kline’s right arm becomes dislocated and Keaton has to help him pop it back in.

My basic reaction as I left the screening room was “why is Kasdan degrading his once-proud brand with a feathery little project like this? A movie about finding a fucking dog in the Rocky Mountains? That‘s what the once-great Kasdan is up to?”

Kasdan’s last truly tasty film, Mumford, came out 12 and a half years ago. I will never stop respecting or believing in his craft and vision, but over the last decade he’s generally been regarded by the media mob as M.I.A. or “on hold” or past it. As soon as I heard about Darling Companion I began wondering if it’s a potential rebound or a place-holder or what. Because my suspicions were, no offense, skeptical. And now I know — it’s a place-holder. It’s actually kind of a mild embarassment.

I don’t mean to speak dismissively of one of the strongest and most distinctive director-screenwriters of the ’80s and ’90s. Body Heat, The Big Chill, Silverado, The Accidental Tourist, Grand Canyon, Wyatt Earp, Mumford — that’s a hell of a 20-year run. But writer-directors have only so much psychic essence, and the prevailing view is that after they’ve shot their wad (as most wads are lamentably finite), that’s it.

For whatever reason Kasdan tells us that the mountain-search portion of the film is happening in Telluride, Colorado, as we’re shown an establishing shot of Telluride’s main street. But it was shot in and around Park City’s Wasatch Mountains. I’m betting that part of the pitch to the Darling actors was “you get a nice five or six-week vacation in the Rockies as part of the deal.”