Last night Christopher Plummer sat for a Santa Barbara Film Festival Modern Master tribute at the Arlington theatre. Plummer said he was unsure if the audience wanted to sit for the whole thing, but it was a pleasure from start to finish with Pete Hammond interviewing, and many — well, about 20% — of Plummer’s films getting the once-over.

The above clip was taken by yours truly as I leaned against the theatre wall about 15 rows back. It’s Plummer talking about playing Mike Wallace (“He was a cruel guy but a great TV newsman’) in Michael Mann‘s The Insider (’99).

Plummer is going to win the Best Supporting Actor Oscar, of course. I pretty much called this four months ago in Toronto, declaring that he had the Oscar more or less “in the bag” and “is going to be awfully hard to beat.”

The general rule is that alcohol abusers, which Plummer has freely admitted to being for two or three decades, tend to pay the price later in life. But not Plummer. He’s 82 and obviously sharp and lucid and in great shape — he ran across the stage last night to accept his SBIFF award. It all comes down to genes. 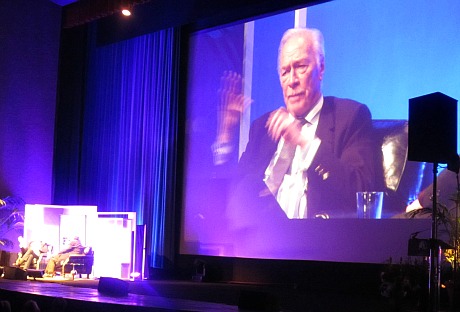