The just-concluded Santa Barbara Film Festival directors’ panel discussion was a dud for the most part. The only directors I found likable and interesting were Bridesmaids‘ Paul Feig, a clever, well-spoken, fast-on-his feet fellow, and Terry George, helmer of a currently-playing short called The Shore. Moderator Peter Bart did what he could, but the panelists included three helmers of animated film (including the ogre-ish Gore Verbinski, the paycheck-driven director of Rango, two Pirates movies and the forthcoming Lone Ranger) so it was almost an animation panel, which are always boring if you’re not an animation fan. 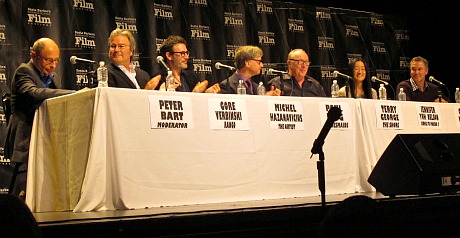 The exception to the boredom came during the q & a portion when three enterprising and obnoxious assholes (one wearing a cowboy hat) took the mike together and asked the panel for help with their filmmaking careers. This despite Bart having specifically stated that such questions were unwelcome and wouldn’t be allowed. Some people are shameless and some are unreachable — this trio was both. They were hissed and booed down and all but thrown out of the theatre.