Sometime within the last two days James Cameron “folded his 6-foot-2-inch frame into a 43-inch-wide capsule and plummeted, alone, down five miles in the New Britain Trench off Papua New Guinea. His feat, in a 24-foot-long craft dubbed the Deepsea Challenger, broke by a mile the world depth record for modern vehicles that a Japanese submersible had held,” according to a 3.8 N.Y. Times story by William J. Broad. 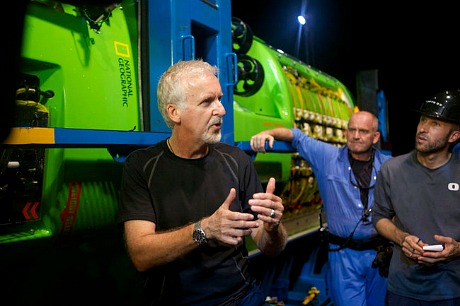 But Cameron “wants to go deeper,” he continues. “This month, Mr. Cameron plans to plunge nearly seven miles to the planet’s most inaccessible spot: the Challenger Deep in the western Pacific, an alien world thought to swarm with bizarre eels and worms, fish and crustaceans. He wants to spend six hours among them, filming the creatures and sucking up samples with a slurp gun.

“It’s a blast,” Mr. Cameron told Broad during sea trials of his new craft. “There’s nothing more fun than getting bolted into this and seeing things that human beings have never seen before. Forget about red carpets and all that glitzy stuff.”

There appears to be some dispute when the five-mile dive occured. A National Geographic story says it happened on Tuesday, 3.6. Broad’s 3.8 N.Y. Times account says Cameron descended on Wednesday, 3.7. An MSNBC report by Andrea Mustain says the dive happened “last week.”