Yesterday I watched Warner Home Video’s brand-new 70th annniversary Bluray of Casablanca. It’s grainier than the 2008 Bluray, all right, and a bit darker. I quickly wrote two prominent grain-lovers, Robert Harris and Glenn Kenny, with my views, and they wrote me back and I replied and blah-dee-blah. 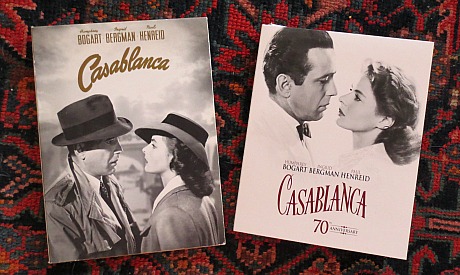 “It’s darker than the ’08 version and it’s covered in billions of digital micro-mosquitoes,” I wrote. “Yes. It looks more like film in a sense but then again the grain is more distinct. I’m appalled that people who know what they’re talking about (like you two guys) are saying they prefer it to the slightly DNR’ed ’08 version. It’s like a gang of grain monks went into the control room and said, ‘Okay, let’s grain this sucker up!’ Amazing. I’ve just spoken to the ghost of Michael Curtiz about this (the Movie Godz put me in touch), and he’s not a fan either.”

Kenny replied as follows: “What I see when I look at the new disc is hardly ‘billions of micro-mosquitoes’, digital or otherwise. What I see is a less bright but more detailed picture with an uptick in structured grain, which is very different from some kind of screen of undulating black pixels. This strongly suggests to me (and of course there have been other indications) that you’re watching on an improperly calibrated set. You might want to consider entertaining that possibility and doing due journalistic diligence on the issue before complaining in a post.”

My response to Kenny: “The sharpness setting on my 50” Vizio is set on 2 or 3. It’s not too high. Many, many films that I’ve watched on Bluray (including yesterday’s arrival, A Streetcar Named Desire) look magnificent. It’s only Casablanca, Twelve Angry Men, The Third Man, Stagecoach and a few others that present a grain problem.”

Harris responded as follows: “Let us have no doubt that I’m with Glenn on this — 100% Having compared the two releases, and independent of the fact that the new element, which is a pastiche of original and dupes, has been re-scanned at 4k, I’m seeing a final result that could have been based upon the first transfer.

“By that I mean that there is a slightly different overall look to gamma in the treatment of shadows and light, but with that exception, the old harvest” — i.e., the 2008 Casablanca Bluray — “appears to be precisely the same, but with grain highly reduced. This was the WB ethic at that time. And it was wrong.

Casablanca “was shot on Eastman Plus-X Cine Pan film 5231, went into use in 1941, and had slightly tighter granular characteristics than the previous stock, 1231.

“This was a classic stock, which was in use, albeit as a safety based product, until 1956, when it was replaced by 5235. A higher speed variant, Tri-X 5233 had arrived in 1954, but it was Plus-X that was the staple of the industry for 16 years — with precisely the same grain structure.

“What this means, is that every domestic production, as well as foreign works using Eastman stock, had precisely the same grain structure, with one caveat. Fully exposed, not push-processed or manipulated.

“The grain structure that we see [on the new 70th anniversary Casablanca Bluray] is a perfect representation of the original, with dupes slightly sharpened to better match original footage. That ‘look’ should have a beautiful, almost iridescent, velvety quality. If it doesn’t, something is wrong with monitor setup.

“I’m willing to go in and take a look when I’m next out, or, as I’ve mentioned to Jeff in the past, that he made need an intervention, and this may call for a visit, if he’s willing from the TV God himself, Joe Kane.”

My response to Harris and Kenny: “In other words, Mr. Harris, you are deeply impressed and very satisfied with the realism of seeing Casablanca as it actually looked on Eastman Plus-X Cine Pan film 5231. Whatever it looks like to my eye or the eye of some Walmart-frequenting Bluray customer in Bayonne or Manhattan Beach or Pensacola, it is, to you, a look of realism…and that realism, to you, is the highest standard and the ultimate consideration. And I respect that.

“I love the ’08 Bluray version of Casablanca, which doesn’t look unnatural or video-gamed to me in the slightest. It allows me to see with great shimmering clarity those wonderful fabrics and weavings and toupee hairs and plaster walls and suit threads that were there on the set when Michael Curtiz shot this film. I understand that ’08 version has been DNR’ed. But in the realm of Blurays, I want the film to look as sharp and clean and unfiltered and un-muddied as possible.

“I understand and have no problem with integrated grain — I want films to look like film. But in the matter of the ’08 Casablanca release vs. the present one, there isn’t a moment’s hesitation in saying that the ’08 version is highly pleasurable and the new version is not. The 70th anniversary grain is not enjoyable to me. To me it’s an obstruction standing between my eyes and the glory of the film’s visuals. On top of which it’s fucking darker, which I hate.

“So I am Blanche Dubois on this issue. I want magic, not realism. I don’t want the visual verite of Eastman Plus-X Cine Pan film 5231. I just want the film to look really good. And I damn sure don’t want images that are darker than on the last Bluray release, If loving the ’08 version is wrong, I don’t want to be right.

“I looked at the new version last night and said to myself, “Thank God there was a period when the original-film-stock grain monks weren’t calling the shots like they are now. Thank God for the magic of movies and the wonderful shimmering silvertone transportation that the ’08 version delivers. Beautiful images forever! Grain monks are a small cult with a disproportionate influence upon the powers that be in the Bluray mastering business, and I’m very sorry that their influence has prevailed in this latest Casablanca Bluray.”

“If there are two things which mystify me and drive me up the wall, it’s 1.78 or 1.85 ‘prison cell’ maskings of films shot with the understanding that a 1.37 aspect ratio would be used in old-style (pre-2005) TV airings, and people who actually prefer a darker, grainier version to a tastefully DNR’d version of the same film.

“Grain was not God’s wonderful gift to filmmakers of the ’20s, ’30s, ’40s, ’50s and ’60s — it was an unfortunate technical reality that was the law west of the Pecos. There was no other choice and it had to be lived with. Nowadays any tasteful and respectful effort to modify or reduce this intrusive element on Blurays gets my vote every time.”