A couple of hours after hearing this morning about Best Buy’s French Connection surprise — i.e., a newly remastered, Owen Roizman-approved Bluray that looks like the original 1971 Oscar-winner — I drove down to a Best Buy at La Brea and Santa Monica Blvd. and sure enough, there it was. 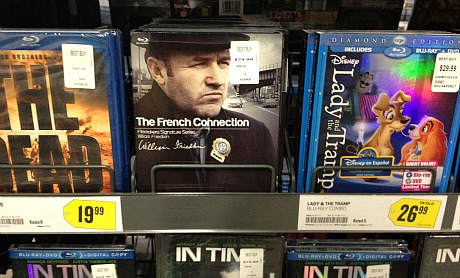 I took it right home and popped it right in…aaaah. What I’ve been dreaming about for years. A pure celluloid capturing of a great New York film experience, some of it luscious, some of it spotty and grainy but all it looking true and right. Some of it looks more lab-fresh than I’ve ever seen. Punchy red neons and such. Other parts look…well, the way they did at Leows’ 86th Street when it opened in the fall of ’71, I’m guessing. Raw, wham-bam, high-impact footage all the way. All gritty, nothing pretty.

No more bluish bleach. No more splotchy colors and monochrome, high-contrast crap. No more creepy-perverse digital fuckwad action. The guy who mucked up the notorious 2009 Bluray version, director William Friedkin, has come to his senses and re-done his masterwork with dp Owen Roizman.

“The nation’s three-year-long, Freidkin-incited French Connection Bluray nightmare is over,” I tweeted. “The bleachy, splotchy ’09 version has been replaced.”

On 2.24.09 Roizman spoke to Aaron Aradillas on a blog-radio show called “Back By Midnight,” and he called the transfer “atrocious,” “emasculated” and “horrifying.” He said that he “wasn’t consulted” by Freidkin and he “certainly wants to wash my hands of having had anything to do with [it].”

For whatever reason I noticed for the first time that in footage of Gene Hackman and Roy Scheider tailing Tony Lobianco and “Angie” through Times Square that Get Carter is playing at the Victoria. 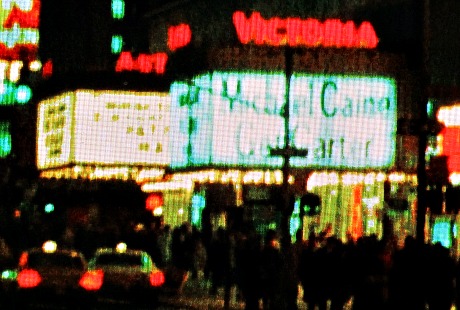