Dean Of The Arts

Like most people, I never cared very much about fine art except for the occasional stroll through MOMA or the Whitney or the Guggenheim or LACMA, or some random visit to a gallery in West Hollywood or Tribeca. And so I never read the late Hilton Kramer‘s art criticism, which appeared in the N.Y. Times from ’65 to ’82, and also in Arts Magazine, the N.Y. Observer, New Criterion, The Nation, etc. Not my world, didn’t give a hoot…sorry. 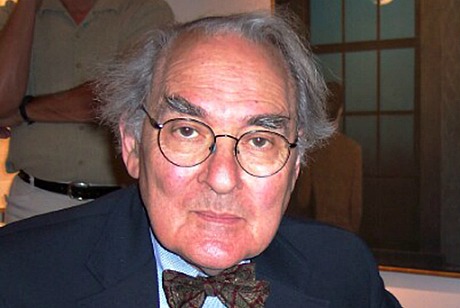 I’m such a fine-art peon, in fact, that when I read yesterday about Kramer’s death my only vivid recollection was from a famous passage in Tom Wolfe‘s The Painted Word (’75). It stayed in my head because it suggested that not only Kramer but perhaps an entire community of art critics had crawled into their own posterior, and that this, perhaps, was why I never found their articles compelling.

While reading a 4.28.74 Kramer piece in the Times about a Yale University Art Gallery exhibition (it was called “Seven Realists: Pearlstein, Bailey, Mangold, Wiesenfeld, Fish, Posen, Hanson”), Wolfe wrote that he was “jerked alert” by Kramer’s pronouncement that “to lack a persuasive theory is to lack something crucial — the means by which our experience of individual works is joined to our understanding of the values they signify.”

Kramer’s statement left Wolfe elated and flabbergasted because in his head it was a key that opened a proverbial lock. “Then and there I experienced a flash known as the Aha! phenomenon,” Wolfe wrote, “and the buried life of contemporary art was revealed to me for the first time.

“All these years, along with countless kindred souls [whom Kramer has characterized as that ‘larger public that knows nothing about modernist art’]… I had assumed that, in art, if nowhere else, seeing is believing. Well — how very shortsighted!

“Now, at last, on April 28, 1974, I could see. I had gotten it backward all along. Not ‘seeing is believing,’ you ninny, but ‘believing is seeing,’ for Modern Art has become completely literary: the paintings and other works exist only to illustrate the text.”

Kramer was a conservative-minded fellow who allegedly took a dim view of various Marxist-lefty-nihilist undercurrents in modern art, and it was apparently this that led to his resignation from the Times in ’82. But don’t take it from me. 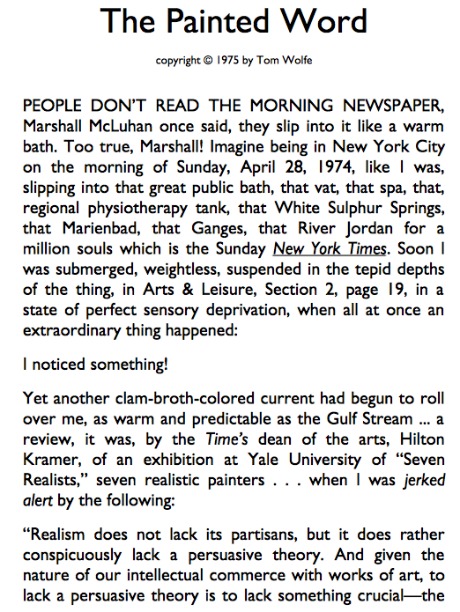 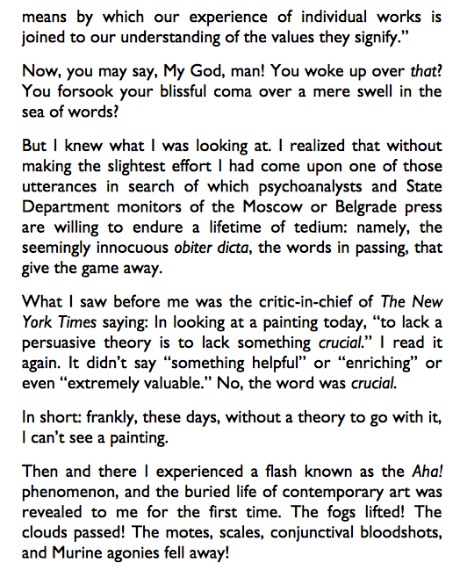