I was so profoundly turned off during last night’s screening of The Hunger Games (Lionsgate, 3.23) that I had to leave for a couple of minutes. I had to get some air and kick out the pent-up energy. Now there’s no hiding. I have to write about it. Can I just load up the shotgun and spray indiscriminate buckshot, or must I methodically explain how relentlessly draggy this film is?

Last night’s crowd (partly media, partly hoi polloi) was paying very close attention, but at no time did I sense anything resembling emotional engagement, let alone tears or fears or sadness or real excitement. The after-mood was one of flatline yawns and chuckles and shrugs. “That was it?” “Ah, well…okay.” “Yeah, you know…gonna be huge.”

After seeing Catherine Hardwicke‘s Twilight on 11.18.08, I posted as follows: “Within its own emotional teenage-girl, imagining-and-longing-for-the-ideal-boyfriend realm, Twilight works.” Not my cup, but a film that worked fairly well within its own perimeters, and which had captured the essence of Stephenie Meyer‘s books.

But Gary Ross‘s The Hunger Games, also based on an enormously popular book series, is at best a mediocre effort — an obviously second-tier thing, tedious, lacking in poetry or grace or kapow. It feels sketchy, under-developed, emotionally simplistic and hambone.

And it looks cheap and cheesy. One act’s worth of CG-looking CG in the big capitol super-city (for the most part), and then two acts of running around the woods in North Carolina with Steven Soderbergh handing some second-unit lensing. And then a wrap-up and a non-finale and cut to black.

My strongest reaction was to Tom Stern‘s awful cinematography. I found it visually infuriating. Stern’s shooting, especially in the last two thirds, is almost all jaggedy, boppity-bop, bob-and-weave close-ups. Way too close. It reminded me of how ’70s TV movies used to look. Stern has dp’ed on several Clint Eastwood films (Gran Torino, Hereafter, Invictus, The Changeling) and CU’s were not his signature before, I can tell you. God, how I was longing for Hoyte van Hoytema!

At no time does The Hunger Games just spell you into submission by how cool and majesterial it looks. The fast and close visual scheme seems to be primarily about covering up the fact that there isn’t much to show. The cutting, clearly, was all about getting a PG-13 rating, and this is R-rated material all the way.

The Hunger Games is about a futuristic North American nation, ecologically ruined and controlled by repugnant urban elites who symbolically punish a once-rebellious citizenry by ordering certain specially selected youths to compete in an annual televised gladiatorial event — an elimination game like Survivor only played for real blood with medieval weapons — in a forested area. The nation watches this contest via hundreds of TV cameras mounted on trees, blah blah. 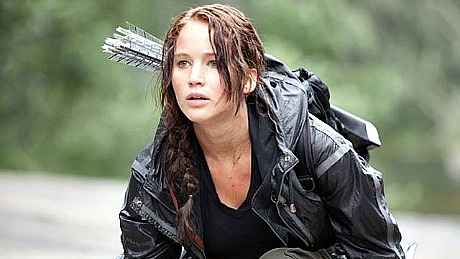 Jennifer Lawrence in The Hunger Games.

Katniss Everdeen (Jennifer Lawrence) is the heart of it, the heroine, the hunter supreme from a down-at-the-heels, coal-mining, Butcher Holler-like district, the 12th of twelve. The arc of Suzanne Collins‘ three-volume story is about her basic humanity — her entirely sane revulsion at the terms of this horrendous environment and system — and a relationship that blooms between Katniss and Peeta Mellark (Josh Hutcherson), a combatant from her district and the son of a baker, blah blah.

Katniss also has a current with Gale Hawthorne (Liam Hemsworth), who figures slightly in this installment but more prominently in the next, Catching Fire, and in the finale, Mockingjay (which may be a two-parter). Fire, I’m told, is mainly about Katniss deciding which guy she’s really in love with, Gale or Peeta, and Mockingjay is primarily about overthrowing the upper-class sickies.

Lawrence seems too big for Hutcherson. She’s a fairly tall, big-boned lady (I’ve been in a hotel room with her) who’s maybe 5′ 8″, and he seems to be something like 5’7″. Male romantic figures have to be at least be as tall as their female partners, and we all know most girls like guys to be at least a little bit taller, so Lawrence and Hutcherson don’t seem like a good fit. It almost looks like she has to bend over a bit to give him a hug. (Hemsworth, a six-footer or thereabouts, has no problem on this score.)

The Hunger Games tells us that each and every person among the upper classes is amused, unconcerned and untouched by the plight of young people forced to fight to the death. That there isn’t a single drop of compassion among all these thousands…not a thought, not a look, not a moment’s hesitancy. That would be inconsistent with human nature, I think. Even during the Colliseum days in ancient Rome a certain portion of the citizenry was appalled by the carnage.

The upper classes are metaphors, I gather, for the boomers who are sending GenY and GenX into a future laden with economic doom and despair. The district tributes are going to have to kill each other in the marketplace in order to survive, and the older GenXers and Boomers find it amusing, touching, affecting…it’s entertainment. The Hunger Games is basically a big “fuck you” to the Boomers. 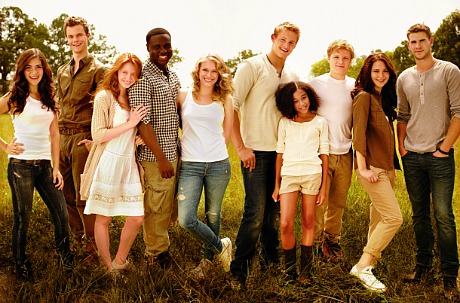 In Act One Katniss is shown hunting game in an off-limits area of a forest in order to feed her family. What prevents district residents from growing vegetables? Has the soil been polluted by nuclear fallout or something?

There’s a moment in Spartacus when Kirk Douglas and Woody Strode are about to fight in the gladiator-school arena, and they’re sitting alone in the shadowed waiting area while Strode eyeballs Douglas with a bitter expression. “Are you a bit sickened by this diseased little moment?,” his eyes seem to say, “or are you amused? I’m somewhere in between.” There’s nothing in The Hunger Games that even flirts with this kind of vibe.

There’s a brief but very angry Spartacus-like rebellion at the end of Act Two when the regular Joes in District 12 fight back against the white-suited drone soldiers, storming the barricades, etc. Their rebellion is crushed but is paid so little attention to that I was wondering why they showed it at all.

Katniss is shown climbing up big limbs of trees without any branches or knobs or suckers to hold onto. She climbs right up leaders of the trees like a squirrel or a monkey. But she’s not SpiderMan and it doesn’t make sense. I used to work as a tree surgeon, and you can’t just scale up bark like you’re a chipmunk. You need handholds and footholds. This part angered me almost as much as Stern’s cinematography..

Some CG dogs, created by the elites, come after Lawrence and Hutcherson at the finale.

I was saying to myself, “Boy, it sure is a good thing that the space-shippy art sculpture in the middle of the field has those slick aluminum sides because this prevents the CG dog monsters from climbing up!”

Here, again, is what I said after seeing Twilight: “Due apologies to those middle-aged male journalists making smart-ass cracks outside the theatre after it ended, but they’re wrong. They’re living in their own world — blinded, blocking, reactionary. Because within its own emotional teenage-girl, imagining-and-longing-for-the-ideal-boyfriend realm, Twilight… should I say this? I don’t want to anger Vivian Mayer. But what publicist would be upset if a guy like myself, an unregenerate adult-movie, classic-movie, indie-movie, Pasolini-admiring, Kubrick-worshipping fan who hates sitting next to giggling groups of women in cocktail bars — what if a guy like me said that this sucker works?

“Because it does. On its own attitudinal terms and given what it’s addressing and saying. And you can take that to the bank and put it in your IRA account. I’ve been in this racket for nearly 30 years and I know when a film is working so don’t tell me.”

The Hunger Games is going to earn close to $90 or $100 million dollars this weekend, but it doesn’t work.